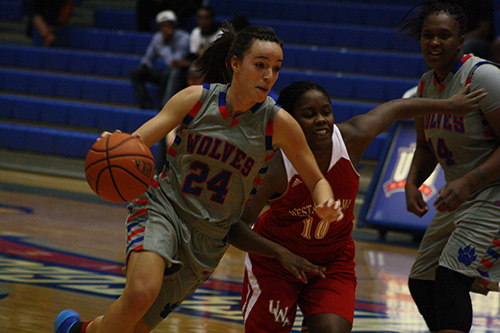 The game was held at The Coliseum in Carrollton, Ga. where the Wolves have also earned their other two wins this season.

UWG has struggled to get victories this season; their current record is 3-10 as they are moving into the meat of their conference schedule.

“I thought we played well enough to win and it feels great to get a win,” said Scott Groninger, UWG head coach.

UWG was led in scoring by junior guard Marion Lemonnier out of Lyon, France. The 5-8 junior finished the game with 17 points and four assists while also going 7-8 from the free throw line.

“I think Marion played a great game, for 40 minutes she was out there and I thought she did a really good job,” said Groninger.

Lemonnier set the pace of the game with her constant energy and ability to attack the hole.

“We really needed this win, especially at home,” said Lemonnier. “It feels great to win because we played together and everybody came ready to play.”

Fellow junior Seandre Lee added 14 points to the cause while senior Taylor Turgeon finished the game with nine points.

Lemonnier’s aggressive gameplay aided the Wolves in the attempt to reach the foul line, which the team did 18 times.

“We’re starting to shoot more free throws than our opponents which is something that we have to do,” said Groninger.

UWG also went 6-14 from the 3-point line on the night, which has been one of the Wolves’ strengths this season.

“They tried to take out our outside shots so we really needed to get in the paint,” said Lemonnier.

The UWA Lady Tigers had three players score in double figures; Kelcia Bufkin led the team with 11 points while both Jada Williams and Quentinette Odom both finished with 10 points. UWA also had a decent game from behind the 3-point line, going 5-12 on the night.

However, UWA also turned the ball over twenty times on the night. This was largely due to the constant pressure the Wolves put UWA under.

“There are certainly a lot of things we can improve on, I thought our full court pressure really hurt them at times and we did a better job at taking care of the ball,” said Groninger.

UWG will have several tough games over the next few weeks as the brutal conference schedule begins to claim new victims.

“We’ve got to keep working, we don’t have the luxury of not being able to work,” said Groninger. “We’ve got to work harder defensively people are just lighting us up from 3’s.”