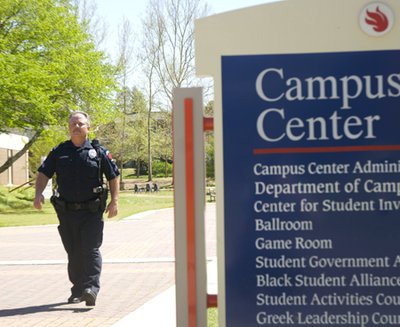 Recently, many students have been feeling unsafe at UWG due to the increase in campus crime. Since the start of the semester, there have been a total of four assaults and robberies. In a matter of two months we have exceeded the total amount of campus assaults and robberies from last year, which totaled three for the entire 2013-2014 academic year.

The first three robberies were all committed following the Homecoming football game on Sunday, Sept. 21. At approximately 3 a.m. a trio of non-students approached a UWG student walking near the fountain and assaulted him. They fractured the student’s jaw and stole $30 cash.

From the UWG campus, the group preceded to the Kangaroo gas station on Maple Street, where they assaulted and robbed two more students. The assailants were eventually apprehended at The Oaks dormitory complex after another attempt to strong arm a group of three students, who were able to put up a fight and call UWG police to the scene.

The most recent strong-arm robbery occurred around 11:15 p.m. on Sunday, Oct. 5. A student was walking on the pathway from Center Pointe Suites to the Biology Building and came into contact with an unidentified aggressor. The aggressor knocked the student unconscious with a blow to the back of the head and stole his iPhone.

“When the officers converged on the scene the guy was already gone, so we still have that instance under investigation,” said Mackel.

Due to this increase in crime, UWG Police is encouraging students to take extra precautions on campus, especially when travelling at night or alone. Each night, minimums of five officers are patrolling around campus and are available to escort students to their dorms or cars.

“Most of the problems we see could be prevented if students would start exercising judgment and think, ‘Oh I need to go to the library late at night, let me call a police escort’ and we’ll be there,” said Mackel.

Another option for students’ safety is the program Wolf Guardian. After registering through BanWeb, students receive two phone numbers to save in their phones. The first number contacts the University Police Communications Center acts as a student’s personal panic button. The second number is used to set a timer for how long you expect to be walking to your destination, and if the timer is not deactivated UWG Police will be notified.

What concerns UWG Police most is that persons unaffiliated with the university committed these crimes. Since UWG is an open campus, anyone of the streets can wander on and create chaos.

“A lot of students come here for a safe community and these people are coming from the outside and making it unsafe,” said Mackel.