Stephen Paddock opened gunfire on a large crowd of 22,000 concertgoers at the Route 91 Harvest country music festival in Las Vegas, Nevada resulting in the deadliest mass shooting committed by a single person in American history.

Nearly an hour later, Paddock was found dead in his hotel room from a self-inflicted gunshot wound. Even after sources interviewed his family members and searched through his financial, travel and health history, there is no clear indication or reasoning as to why this man decided to gun down thousands of innocent country music fans. 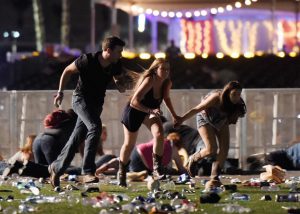 Since the shooting, the authorities and media have released rather confusing information about the mass shooting that is almost too difficult to believe, causing even more speculation about what all is even true with this.

Paddock was initially portrayed as an ordinary man living an ordinary life, but is now being reported as an obsessive gambler and wealthy real estate investor with no signs of mental illnesses. His brain is being dissected by Stanford University and undergoing tests to help understand why he committed this mass murder, but authorities do not believe they will find anything.

The one real rationale that lies horrific event is that bad behavior is common in his family. Paddock’s father was a bank robber on the F.B.I’s Most Wanted list for over a decade and his brother was recently charged with possessing child pornography.

Almost a dozen suitcases filled with 23 weapons and loads of ammunition somehow made it up to Paddocks hotel room without being noticed. Housekeepers cleaned his room and room service visited during the days leading up to the shooting but did not notice anything out of the ordinary. Paddock possibly had inside help, but even that answer will likely never be fully confirmed.

Many reports have since been released regarding multiple shooters and several broken windows seen at the hotel that night. Numerous videos from witnesses show conflicting reports on how many people shot down into the concert crowd even though only one shooter is identified by authorities.

A security guard of the hotel, Jesus Campos, was first reported to have been shot by Paddock six minutes before he began firing down at thousands of people. Recent information has been reported that this is false and Campos was shot closer to the time Paddock began firing shots.

It was also believed that Paddock had a girlfriend named Marilou Danley. Reports first stated that she might have been his accomplice in the mass shooting but it has since been discovered that Paddock paid for her to be out of the country specifically during this time.

Not until weeks after the shooting did the authorities release the information that the computer found in Paddock’s hotel room at Mandalay Bay, was missing its hard drive.

With new information being released by authorities, Americans can only wonder why innocent concert goers were targeted by this act of evil. We will never know how or why the deadliest mass shooting in modern U.S. history took place.