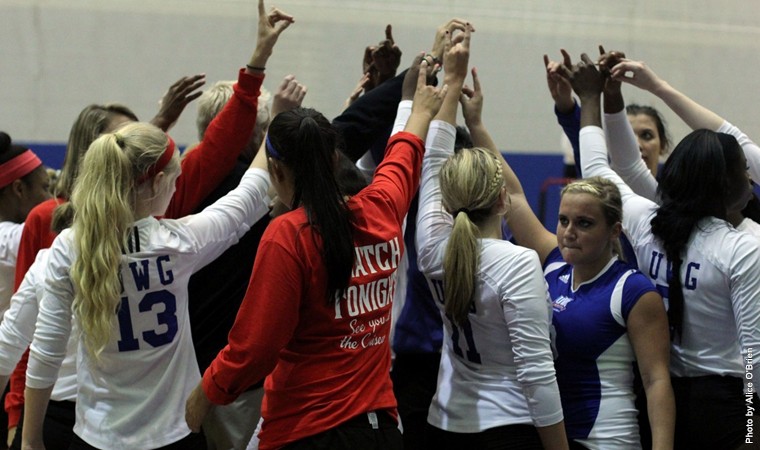 The University of West Georgia’s volleyball team is facing a new era after the resignation of Coach Gary Lee, but has found a prominent leader in new Interim Coach Trina Braden.

Coach Braden brings a considerable amount of coaching as well as playing experience to the program this season. Because she was a multi-sport participant at Maryvale High School, the Arizona Republic named her the Arizona Female Athlete of the Year.

She continued to excel after playing at Division I Northern Arizona University. There she was named Female Athlete of the Year and All-Northwest Region First Team in 1993.

Braden spent eight seasons as the head coach of Embry-Riddle University with conference record of 66-36, an overall record of 152-116, and she received the Coach of the Year award. She has also been an influential coach to the A5 South club volleyball program located in metro Atlanta. She hopes to introduce the UWG team to a new technique of teaching.

“I want to bring an energy unlike any other coach that has ever been apart of this program. I like to be energized on the sideline. I feel like when I am energized my players are energized as well.”

In person, as well as on the court, her infectious energy is apparent through the level of intensity displayed by the team as well as the rest of the coaching staff.

When speaking about Braden’s method of coaching, junior defensive specialist, Casey Roethler said, “It is very personalized to each individual player. You can tell that she cares and is intense.”

The West Georgia team is returning eleven of the nineteen players from the 2013-2014 season after making a strong run at the championship. They lost to the University of West Florida in the finals in five sets.

Braden’s vision for the team is to absolutely return to the Gulf South Conference championship and win as well as produce a team of Academic All-Americans. She emphasized the student-athlete role played by the girls on the team. She believes they are students before anything else. She never wants the girls to lose sight of the reason they have all chosen the UWG, which is to gain a degree in their chosen field and playing the sport they love as a bonus.

Braden gives credit to previous head coach Gary Lee for selecting such a talented group of girls to bring into the UWG volleyball program.

“God doesn’t put me any place that I’m not meant to be, so there’s not a lot of pressure in the sense of being the interim coach,” she said. “My hesitation is in not wanting to fail my team. I always want to be able to give them my all each and every day.”

With a new strong force at the head of this team, the women’s volleyball program seems stronger and more united than ever.