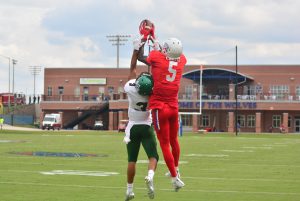 After a hard fought battle with conference opponent Delta State, the third ranked Wolves travel three hours south for a non-conference matchup against Southern Intercollegiate Athletic Conference team Albany State. The Wolves head into the game with an unblemished 3-0 start to the season, whereas their counterparts on the other side of the ball will kick off with a 1-2 record.

The University of West Georgia has been winning the month of September. Since Will Hall’s start at West Georgia, the Wolves are 11-0 in the month of September outscoring their opponents by 329 points in the month alone. Coach Hall’s squad has started this season off just as impressively as the previous two years, especially on the defensive side of the ball. With the team only allowing 27 points thus far it is hard to lose a game when your team only gives up an average of 9 points a game.

Offensively, the passing game came alive last week against the Statesmen with four touchdown passes from Will Gardner and two receiving catches from DeNiko Carter. It is safe to say the pair has built some comfortable chemistry since the start of the season. The run game is no slouch either for the Wolf Pack. The three-headed monster of Lamarcus Franks, Devontae Jackson and Josh Thomas have collectively rushed for at least 120 yards in every game this season and look to do much of the same against the Golden Rams.

Albany State has not had the same success as UWG to start the season by losing their first two games on the road before finally getting a 22-point victory in Lakeland, Fl., against Southeastern University. The Golden Rams are coming off of a 6-5 season and are looking to get back to .500 against West Georgia this Saturday in the comfort of their home, The Albany State University Coliseum, where they have won their last three games.

The Wolves are riding a home win streak of their own, where they have won 18 consecutive games at University Stadium. Whether it is the ruckus crowd in Carrollton or the pride of defending the home turf, UWG simply refuses to lose at home. Coach Hall has never seen what a loss looks like on Ra-Lin Field since he has been here: all of the five losses UWG has suffered under his tenure have been on the road.

“We have an opponent in Albany State that is a team that has made the playoffs a lot the past few years,” said Coach Hall. “They are 1-2, but they are much better than what their record is. It is going to be a tough environment where we have not played at in a long time, and it should be a great game.”

These teams have not played since 2003 when the Wolves were defeated 34-7.