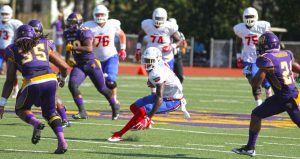 The Wolves travel down to South Georgia to take on the Valdosta State Blazers in their annual battle for the Peach Basket. UWG is currently riding a three game win streak against their rivals from Lowndes County over the past two seasons. The Wolves have knocked VSU out of the playoffs two straight years, once in Bazemore-Hyder Stadium and once here at home.

The Wolves and Blazers have played every year since 1983. Valdosta State leads the series 22-13. In that span, VSU has won three national championships. Under the leadership of Head Coach Will Hall, West Georgia has gained some momentum in the rivalry, winning the past two meetings and going to the national championship semifinal. This will be the first time in a decade that Valdosta State will play the Wolves without having Coach David Dean leading the team into battle. Coach Dean took a coaching job at Georgia Southern after last season ended.

Coach Hall himself is 4-3 against Valdosta State as a head coach and 3-1 since coming to UWG. So far this season, the Wolves are ranked 12th in the country and are 3-1 after a last-second loss to the Lions of North Alabama. VSU has already experienced the same fate as the Wolves with a loss to inter-conference opponent North Alabama in Florence. With both of these teams losing to the same opponent in the same venue, it is hard to grasp exactly what to expect in this upcoming rivalry game.

The Wolves played possibly their best game against their best opponent so far. Despite the loss, their offense was clicking, the defense was getting turnovers and the team improved on their penalties. Valdosta on the other hand, played their worst game against the same opponent. UNA took VSU to the woodshed, the halftime score was 30-9 and the Lions never looked back.

UWG is looking to get back to their winning ways and win back to back games in Valdosta for the first time since 1999, when the Wolves finished the season 9-3. However, this task will not come easily. In a rivalry game anything can happen. Both teams are familiar with each other; they both prepare all year for this game. This is always the biggest regular season game for both sides. To get the win in Valdosta, it is going to depend on which Wolves team shows up on Saturday night.

Valdosta State has won their last six home games all by nearly 16 points per game. Though the Wolves knocked off the Blazers in 2014 in the playoffs, the Wolves lost 40-6 at the last regular season game played at their stadium. This game has all the makings of being a hard fought battle right until the very end. Since 2011, three games played between these two Gulf South Conference powerhouses have been decided by less than 10 points. The Wolves are entering Bazemore-Hyder Stadium in possession of the Peach Basket for the first time since 1999 and are hoping to bring it back to Carrollton and University Stadium once the clock hits all zeros.