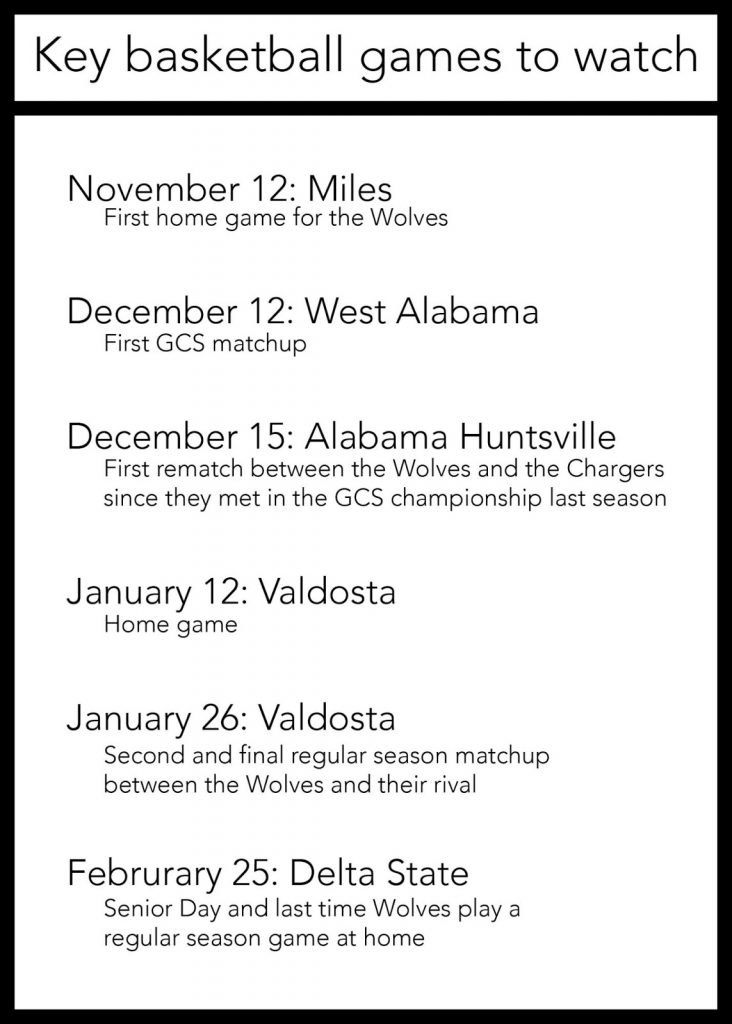 The Wolves are coming off a season where they went 22-9 and won the GSC title for the third time and the first time since 2001. They finally ended their season with an National Collegiate Athletic Association (NCAA) tournament berth where UWG suffered a first round loss to Stillman 85-79 in Huntsville, Ala. Throughout the 2015 campaign, the Wolves flexed their muscles on offense, averaging 85 points per game. The defense was no stranger to success either as they forced nearly 14 turnovers and 3.5 blocks per game.

The team looks to expand on their success from last year behind the leadership of perimeter players Steph Branch and Keron Briggs.

Branch, a senior transfer from Mt. San Antonio College in California, lit up the scoreboard last year, averaging nearly 14 points per game. To go along with his scoring success, he also had 47 assists, 31 blocks, 64 steals and 200 rebounds. Branch was awarded Second Team All GSC honors.

Briggs led the Wolf pack in free throw percentage, making an astounding .815 percent of his shots from the line. The senior from Buffalo, N.Y., didn’t get fatigued easily last year while playing for more than 20 minutes per game. His 21 steals and 50 assists helped lead the Wolves to their impressive season a year ago.

With two transfers from division one programs, expectations are that talent and chemistry will be quickly built by the start of the season.

Cameron Blakely, center transfer from Charlotte, has success shooting from three-point range, which will help spread the floor this season.

Georgia State transfer Willie Evans begins his second season at UWG and hopes to increase his points and steals this year with additional playing time.

While the Wolves are no stranger to starting the season off against division one opponents, as they have done the past eight years, they have yet to play an opening matchup of this magnitude.

UWG will go across country to Spokane, Wash., to take on West Coast Conference powerhouse Gonzaga the first Saturday of November. Gonzaga has won their conference 15 of the past 16 years and has made it to the division one NCAA tournament 19 times, having their season ended in the Sweet 16 the past two years. This is easily the biggest opponent that UWG has faced in recent memory. A win against the Bulldogs could start the season off as an enormous confidence booster heading into the long season.