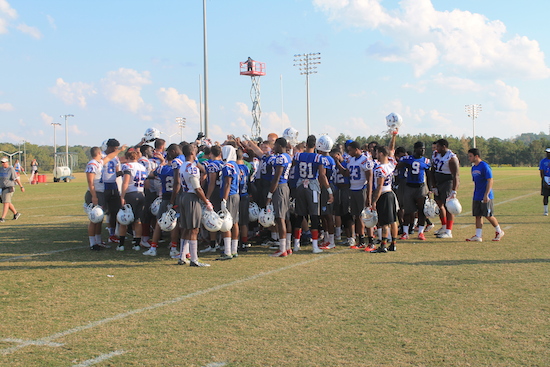 The Wolves have arrived at the midseason mark, and after six weeks, the Wolves are 5-1. For the first time in over a decade, the team is poised take a trip into the postseason.

At this time last year the Wolves held a 4-2 record, which is an underwhelming difference from what the season looks like thus far. However, comparing overall records with past seasons is a flawed strategy when evaluating this year’s Wolves.

After a victory over the University of West Alabama, Coach Will Hall’s old stomping grounds, UWG claimed the no. 21 slot amongst all Division II schools in the Nation.

However, inconsistent characteristics haunt the Wolves once again in high stake environments as they fell 40-6 to Valdosta State University’s Blazers; a team they have not beaten since the 2011 season.

The Blazers had a rocky start to the season, gathering a 2-2 record through their first four games. Coming off of a close 29-31 loss in Florence, Ala. to the University of North Alabama Lions, the Wolves looked desperately to rebound and rebound they did.

Just a week ago, the Wolves were in sole possession of the best record in the Gulf South Conference. An impressive feat considering the fact that Delta State University and UNA both held a higher spots in the NCAA rankings. This is quite a turnaround from what the team was just a year ago.

“We are where we thought we would be, we were confident in ourselves and our plan,” said Coach Hall. “Now, we’re not a finished product, we have things to clean up, but we are in a good position.”

The Wolves have hung their helmets on being able to run the ball and stop the opposition from scoring. The Wolves held both Miles College and John C. Smith University to zero points and Clark Atlanta University to only two points. A statistic they will need to rebound from after giving up 40 points to the Blazers.

The grudging defense has been the saving grace for this Wolves team, and with the no. 1 passing offense among others still remaining on the schedule, it will require an equally selfish effort from the defense to close this season as strongly as they begun.

Throughout half of the season, the Wolves managed to rank first in total and scoring defense. This is the result of great team defense and fundamentally sound players, and collectively they only gave up an average of 9 points to opposing offenses.

The offense is not to be taken lightly either, which leads the Gulf South Conference in time of possession. The culprit of this statistic is primarily the rushing attack that is entirely eclectic. UWG quarterback Dallas Dickey, along with running backs Seth Hinsley and Brandon Lucas, account for nearly 1,000 yards with each shouldering at least 50 attempts.

Though running the ball seems to be the Wolves’ strength, they are also one of the most efficient passing attacks in the GSC. The Wolves have completed 65.9 of their passes and have scored 12 touchdowns through the air.

The toughest portion of the 2014 schedule is staring directly at Hall and his Wolves. Through the next two weeks, the team will play their biggest rivals in the conference: DSU and UNA.

Coach Hall was not shy in sharing his feelings for Valdosta.

“You have to beat the man in order to be the man, and that’s the position we are in at this time of the year,” Hall said.

A team the Wolves will encounter again when they take on the top passing attack in the conference is DSU, a team ranked within the top15 teams in the Nation. This is, without a doubt, the toughest task the Wolves have faced thus far but a mission that must be accomplished in order to reach the postseason.