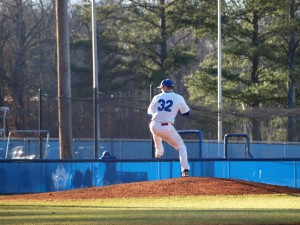 The University of West Georgia (UWG) baseball team showed off their strong bats and pitches in a 17-0 shutout victory in the season opener on Jan. 30. The Wolves scored 17 runs on 16 hits and were backed up by an experienced pitching rotation that threw an impressive combined two-hitter against Emmanuel College.

“Our guys went out there, and right from the very beginning, they just dominated,” said Head Coach Skip Fite. “We have a good team with a lot of really good guys.”

UWG demonstrated their aggressive lineup and their ability to strike from anywhere in the batting order. Senior Tyler Hutch got things rolling for the Wolves in the very first at-bat of the season, with a solo home run to deep left field.

“At the beginning, we were obviously excited about Hutch, but I was a little bit disappointed with our guys at the plate in the first and second inning,” said Fite. “We had a lot of good chances with runners in scoring position and couldn’t get them across, but I like the way our guys settled down and came back strong in the third.”

The Wolves showed that their talented lineup can hurt a team at any time and put the game out of reach in the third inning. UWG scored 10 runs on five hits to give them an 11-1 lead and put the game away early. The biggest hit of the inning was a three run blast by catcher Payton Mann. The Wolves also tallied another six runs in the eighth inning.

“(Mann) really got a hold of that one in the third, and we have guys all through the lineup that can hit it out of the park when we need them to,” said Fite.

UWG’s pitching staff was equally as impressive as the high scoring lineup, keeping the Emmanuel batters off the base paths all afternoon. The Wolves’ pitching staff for the game consisted of all seniors. Senior Matthew Norton was the winning pitcher, throwing four hitless innings. Norton’s relievers were equally impressive with Brandon Goldsmith, who threw three scoreless innings, followed by Ethan Hunter and Tyler Gunnin, who threw perfect innings to close out Emmanuel and notch the first win of the season.

“We threw a lot of really good pitchers today, but there’s a lot of guys that we didn’t throw that are as good as the guys we threw today,” added Fite. “Our pitching staff is good, and when we have to start playing close ballgames against teams as good as we are, we are going to need those guys. We have a very mature team, and hopefully that can help us win close games this season.”

The Wolves play host to Pfeiffer University on Saturday, February 6 at 1p.m. at Cole Field.