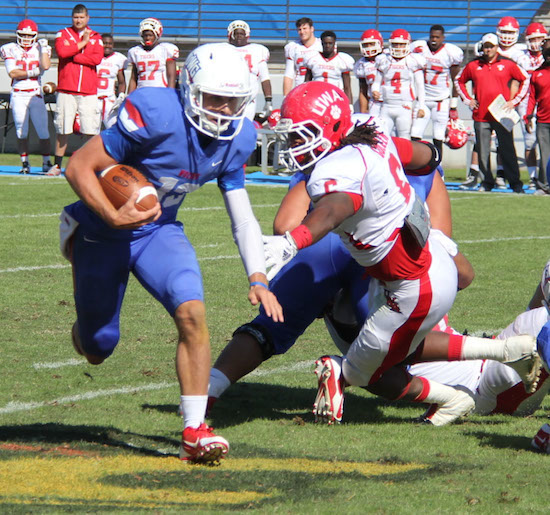 On a breezy Saturday in Carrollton, Coach Will Hall and the West Georgia Wolves football team improved to 5-0 and 1-0 in conference play after beating Coach Hall’s former team, the West Alabama Tigers, 26-17.

After starting the season undefeated, UWG found themselves ranked in the American Football Coaches Association Division II top 25 poll earlier this week, coming in at number 24. This was the first time UWG had been ranked since the 2001 season. West Alabama, the two-time defending Gulf South Conference champions, were ranked at number 22 in the polls, making this the first time in University Stadium’s history to host a ranked matchup, and the game was not short on drama.

UWG started off slow, trailing West Alabama 7-0 at the end of the first quarter after a 2-yard touchdown plunge by West Alabama junior running, back Jabari Baker.

After the shaky start, the Wolves pulled ahead in the second quarter and never looked back. Wide receiver, Alex Macaulay caught a 4-yard touchdown reception from UWG quarterback, Dallas Dickey to knot the game up at seven apiece early in the second quarter. After a 21-yard field goal put West Alabama ahead, the Wolves answered with a 21-yard touchdown catch by running back, Brandon Lucas. After missing an extra point, the Wolves went into halftime, leading 13-10.

UWG kicker, Hunter Heck hit a 33-yard field goal midway through the third quarter to slightly expand the Wolves’ lead. Shortly after, UWG quarterback, Dallas Dickey broke the game wide open with a 62-yard touchdown run, making the score 23-10 in favor of the Wolves. West Alabama pulled within 6 points in the fourth quarter after defensive tackle, Ashton Derico intercepted a tipped pass by Dickey on UWG’s own goal line for a touchdown. However, the Wolves iced the game with a 36-yard field goal by Heck with 4:30 left on the clock.

Dickey set a career high in rushing with 151 yards, while Lucas and running back Seth Hinsley added 59 and 47 yards, respectively. Dickey also led the team in passing with 86 yards and 2 touchdowns, with Lucas leading the team in receiving with 25 yards.

The importance of this win was not lost on Hall, who has now led West Georgia to a 5-0 record and their first win over West Alabama since the 2009 season.

When asked about what it was like to play against his old team, Coach Hall was not nearly as jovial.

“It sucked,” he said. “I pour everything I have into my players. You make decisions in life sometimes that you have to do what’s right for you family, and that’s what I did, and I’m proud to be a West Georgia Wolf, but I love every player I’ve ever coached.”