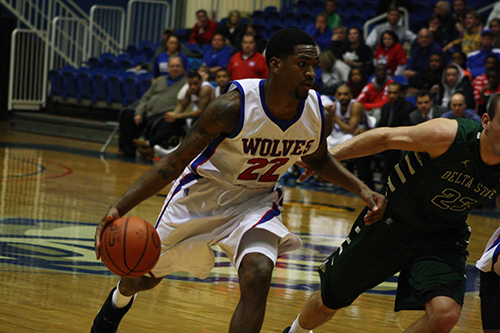 The University of West Georgia (UWG) Men’s basketball team pulled off the upset of Delta State University (DSU), defeating the Statesmen 76-73 on Thursday night in The Coliseum. DSU came into the game as the number 14 team in the country and atop the Gulf South Conference standings.

UWG already fell to DSU back on Jan. 4 by 17 points. Thursday’s win pulled UWG’s overall record to 14-7 and their conference record to 6-6. DSU’s record dropped to 18-3 on the season with a 11-2 record in the conference.

“This Delta State team is just brutally tough, such a hard team for us to matchup with,” said UWG Head Coach Michael Cooney.

DSU started the game on a 9-0 run and controlled much of the first half. UWG was able to stay with them and went into half time with only a three-point deficit.

“We could have caved in, they could have been up 10 or 14 points in the first half with how poorly we were playing offensively,” said Cooney. “But the defense was good enough to keep us in the game in the second half.”

UWG took their first lead of the game within the first few minutes of the second half, from there the game went back and forth all the way until the very last shot. The buzzer sounded as a last second three-point attempt by DSU’s freshman Devin Schmidt bounced off the rim, giving the Wolves the victory.

“Our team has got a lot of heart, a lot of character, they care and they are firmly committed,” said Cooney.

The Wolves were led by their emerging star point guard Deonta Stocks who scored 26 points in the game. Stocks also knocked down 5-6 key free throws in the last minute of the game that forced DSU to take contested three-pointers.

“We knew coming into this game that we had to win, they jumped out on us up in Cleveland [previous game] and we didn’t have a chance,” said Stocks. “But tonight we pulled it together.”

Stocks emerged as the clear leader for the Wolves. When the game got really tight at the end the ball was in Stocks’ hands. He played 35 of the 40 minutes of the game and proved to be clutch for the Wolves late.

“The thing that is most impressive about Deonta now is he’s starting to take care of the ball,” said Cooney. “We felt secure with him out there on the ball and I don’t know if we felt that way a month ago or six weeks ago.”

Stocks was the only player for UWG to score double figures but nearly every other player got in on the action. Deontre Brown and Emory Bernard got serious playing time and were able to make a lot of hustle plays that spurred on the Wolves.

“We got on the same page offensively,” said Cooney. “Our guys started sharing the ball and started taking advantage of some of the opportunities out there and the next thing you know we got into a rhythm.”

DSU was led in scoring by their senior center Willie Readus who had a double-double with 25 points and 15 rebounds. Schmidt added 14 points to DSU’s total while sophomore guard Jack Madgen finished with 11.

UWG’s junior forward Stephan Thompson returned for his first game back in a month, he scored seven points and brought in eight rebounds.