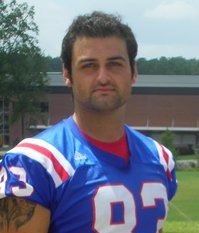 It has been years since a University of West Georgia football player has furthered their career to the professional level.  UWG’s Daniel Youssif is drawing a considerable amount of attention from scouts of the National Football League (NFL).

Youssif, sociology major, was a towering figure on UWG’s football team during the 2012 season.  He might also prove to be one of the best sleeper picks at the tight-end position in the 2013 NFL draft.  Youssif has been making a buzz among NFL scouts by using social media platforms.

His talents impressed scouts enough for them to come to UWG and observe him in action.  “They sought me out.  Usually it’s tougher to get an agent at a smaller school.  Worldwide Career Management (WCM) found me,” said Youssif.

According to WCM, Youssif is described as, “A strong, physical blocker who can be a key member rushing attack but also has great hands to catch passes as well. Youssif definitely has the strength, size, and speed to compete for a job in the National Football League.”

Their assessment is not exaggeration.  When comparing Youssif’s statistics to those of other tight-end prospects that competed in the NFL combine, Youssif appears to be a top pick.  His bench press would have been the second highest among tight-ends and his 40 yard dash time would have placed in the top five performers.  UWG’s offense is very reliant on their rushing attack, but Youssif never dropped any of the passes thrown his way in his three years as a Wolf.

Draft prospects from smaller institutions are using social media to help reach as many corners of the industry as possible.  “Right now, we’re just putting out feelers to get as many people interested and trying to get my name out there through social networking,” said Youssif.   “They (WCM) take care of all my publicity stuff from social networking to getting my film in the hands of the right people.”

Youssif, originally from Clinton Township, Michigan, has dreamed of being an NFL star since he began playing football at the age of five.  “My father and I always watched it growing up and now I’m getting to live out my dream,” said Youssif.  “You get to pretend you’re that star player growing up.  I envisioned myself being one of those successful guys.”

After he graduates this spring, Youssif plans to focus full-time on becoming a professional athlete.  “It’s a year-round job and you’ve got to treat it like it is.  You have to be very business-like about it,” said Youssif.  He currently trains at Next Level Sports Center in Carrollton and also at a facility in Atlanta.

“There are a lot of aches and pains in football and you have to take care of your body.  You also have to stay mentally strong. It’s a mental game as much as it is a physical game,” said Youssif.