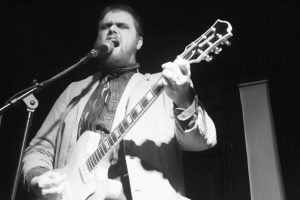 Bear Rowell steps up to the microphone. He holds his guitar and begins looking around the dimly lit room. He wears a dingy but nicely pressed grey dress coat. His face is covered in white face makeup, and his eyes are painted black. From a distance he looks like a dead man standing. This man is no longer Bear Rowell. He is a deceased preacher. He is a sinner. He now must sing and tell the stories of his life as a dead man.

Rowell is the lead vocalist and guitarist for the local horror punk/gothic country band Graveyard Gospel. On stage, the band acts as zombie church officials: a “greasy youth pastor,” a “terminally abused altar boy” and a deacon named “Brother Bishop.” To stay in character the band address the audience as a church congregation. They paint their faces and wear dingy, tattered dress clothes to appear dead. The band is in the process of recording their first original album, but what they do is not solely about the music. The live performances are what make them stand out.

“We always send around a collection plate and ask the congregation to give 10 percent of their cigarettes to the church—a cigarette tithe,” says Rowell.

The band is working towards developing their performances. Rowell wants to create great music, but more importantly, he wants to create an even greater atmosphere. Graveyard Gospel strives for entertainment and a good show. Since the band is growing and changing, each live performance is always different than the last. For Graveyard Gospels next act, the band is scheduled to haunt The Pointe bar in Conyers, Ga. on Sept. 24 at 9 p.m.

“We’ve got some strange stuff planned,” says Rowell. “Hopefully it will make some people uncomfortable. It’ll be great.”

Graveyard Gospel does not set out to offend; instead the band criticizes church officials who abuse power. Performances have a satirical edge on Christian practices, such as baptism, reading the bible, preaching and collecting an offering. The lyrics to original songs are explicit, containing themes such as corpse violation, murder, hell, condemnation and the uncanny. However, the goal of the band is not to challenge religious principles but rather to entertain.

“It’s not an intentional jab, at least not at the common man,” says Rowell. “It’s a jab at the big super churches and the kind of skeevy practices of some pastors and church leaders.”

Rowell found inspiration from the gothic country band Those Poor Bastards before creating Graveyard Gospel. Out of his inspiration, Rowell wrote the song “The Presence of Evil.”

“I wanted to make my own version of that back woods, creepy, oddly religiously slanted music,” says Bear.

He shared the song with his friend and now bandmate Clifton Bishop, and the two coincidently shared an interest in creating a horror-themed band. Thus, Graveyard Gospel was born. Later they added a third member; today they are a guitar, bass and drum trio.

Before his time with Graveyard Gospel, Rowell grew up in a nuclear family that attended church where they applied themselves musically.

“My childhood was pretty great,” says Rowell. “I’m not one of these tortured souls that had a rough time. I had parents that were really supportive and loving of my music interests. It was the dream.”

He had a natural curiosity for music. He always sang in church as a kid—it was expected of him.

“I can’t remember a time in which I didn’t sing,” says Rowell. “I have a lot of fond memories of traditional hymn music and some of the gospel I was exposed to. So a lot of it is just a genuine honest influence.”

Rowell believes there is room for error when performing with Graveyard Gospel. The band can mess up and the mistake would go unnoticed. The bands act is fast and loud which allows Rowell to let loose, feel comfortable and have fun.

The final anthem comes to a halt. Bear Rowell backs away from the microphone and looks out at all the eyes locked on him. He holds his guitar with sweating palms. His face makeup has mostly sweated off onto his already dingy church clothes. From a distance he still looks like a dead man standing but rather one who has suffered. This man told his story and is now exhausted from the act. The dead preacher can now find rest until his next haunting sermon.