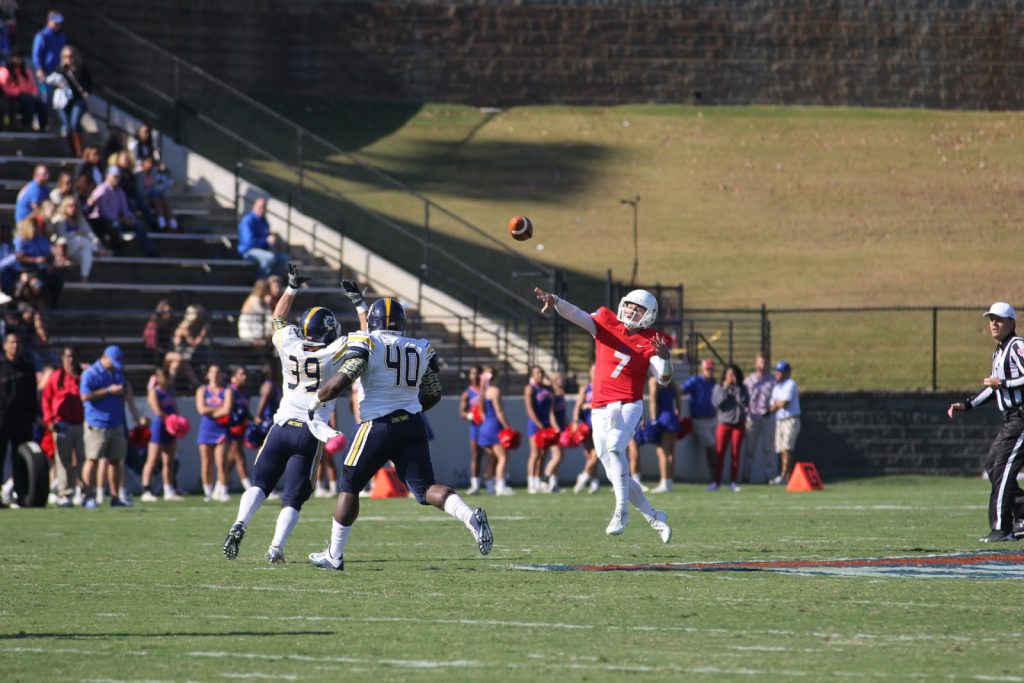 The UWG Wolves have found their future quarterback in redshirt freshman Willie Candler. After a lackluster season with the first seven games, which resulted in a 4-3 record, Head Coach Will Hall gave the nod to the 19-year-old dual-threat quarterback. He has performed better than anyone could have expected in the beginning of his college career.

On Sept. 3, the Wolves took the field for the first time in 2016 as the second-ranked team in Division II football. Expectations were high with the arrival of former four-star high school quarterback and Louisville transfer Will Gardner at the helm of the offense. The offense was expected to strike quickly and frequently with this talented recruiting class, and with the Wolves starting the season 4-0, it seemed that everyone received what they anticipated.

However, after a 24-23 defeat at the hands of North Alabama and a 38-27 loss to rival Valdosta State, Coach Hall implemented a new philosophy: “If you turn the ball over, you won’t play.” During those two games, Gardner had thrown seven interceptions and only one touchdown.

On Oct. 15, Candler saw his first significant amount of action against West Alabama. In that horrendous 31-7 blowout that snapped the Wolves 18-game home win streak, Candler out-performed Gardner, throwing for more yards on less attempts and doing something that had not been done this season: he did not throw an interception. Since then, Candler was promoted to starting quarterback of a talented team that rode their first three-game losing streak since 2012.

Candler’s first game as a starter came during Homecoming against the 2-5 Mississippi College Choctaws. Not only did the team see a change at quarterback but also in their offensive scheme. Candler is a dual threat quarterback, meaning he isn’t a stranger to running the ball himself.

Under this new offense, fans saw the read option attack for the first time all season, which is the same offense that the Wolves used the previous two seasons when they went to the semi finals.

In Candler’s first start, the young quarterback passed for 181 yards and three touchdowns. He also ran the ball five times. Most importantly, he did not throw an interception and played with poise from start to finish of the game.

“He played great,” stated Hall. “He was named GCS Freshman of the Week, and hopefully we can build on that moving forward. I just can’t say enough about his leadership.”

With the freshmen’s first home start behind him, the Wolves took to the road for an inter-conference battle against Shorter University. With this being his first action away from home, hopes around campus were that Candler could continue his success from last week. He sure answered those questions in a big way. the young quarterback showed flashes of former UWG great Dallas Dickey the way he controlled the offense with his poise, leadership, and playmaking ability.  Candler ran the offense out of the read option, and controlled the offense in a way that we haven’t seen all year. He completed nearly 70 percent of his pass attempts, racked up 215 yards, both in the air and on the ground, and scored two touchdowns on the way to a 44-0 shutout.

Since first seeing the field, Candler has 478 yards, five touchdowns and no interceptions. The Wolves still have a chance at making the postseason, but it will be an uphill battle, and the Wolves will need some teams ahead of them to lose. If this new quarterback keeps playing the way he has been, there is a chance he could take this team riding off into the sunset as they hope for their first National Championship since 1982.

1 thought on “A new quarterback in town”