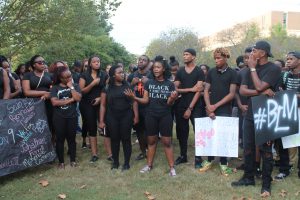 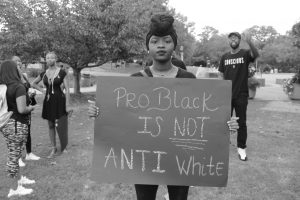 The UWG chapter of the National Association for the Advancement of Colored People (NAACP) dedicated Monday night, September 26, to remembering all of the African American individuals slain due to police brutality and other racial discriminatory incidents by holding a silent protest on the campus promenade.

Promotion for the protest began Thursday, September 22, on social media and caught fire. The NAACP called for all black attire and signs of your choice at the event. Beginning at 6 p.m., students, faculty and staff came together with signs in hand at the grassy triangle in solidarity for one cause.

“I found out about the event through Twitter,” said attendee Terriana Watson. “Even though it’s a silent protest, my voice would be heard and that’s what I wanted.”

The event began with supporters taking a moment of silence for individuals like Tamir Rice, Trayvon Martin, and the recently deceased Terrence Crutcher and Keith Lamont Scott while holding hands in a circle. The overcast sky paired with the silence created a peaceful yet solemn aura over the demonstration.

The floor was then open to anyone who wanted to share anything on their heart pertaining to social justice, equality for people of color and progression as a suppressed race. A passionate conversation ensued as more students trickled in to listen. Although promoted as a silent protest, the longing to share feelings and ideas with one another was strong, so speaking was permitted.

“The goal was to bring awareness to police brutality, inequality and how we, as a West Georgia community, can come together and make a change,” said NAACP Vice-President Ji’Brayah Marson-Young.

Students spoke on a variety of topics including higher education, voting rights and proper self-care while enduring such violent news. Sharing across the circle, everyone was receptive of each other’s ideas and thoughts for the duration of the protest.

With the university remaining silent on the matter, black students have been yearning for recognition for their community from a respectable entity, and NAACP gave them just that. Marson-Young expressed that NAACP’s general body members were the initial students to bring the need for a protest to their executive board’s attention and was later put into motion by her and President Kayla Mitchell.

“It was a little bit of everyone’s help that made this protest what it was,” said Mitchell.

In closing, Dr. Michael Hester gave the organization encouraging words in support, and Mitchell reassured the crowd that this silent protest would not be the last event of its kind.

“The NAACP’s initiative was a great example of how education exceeds the boundaries of the classroom and contributes to creating a more perfect union,” said Hester.

Unity was an obvious picture that framed the night as black students came together for one cause; attendees left with smiles on their faces and a lighter heart in tow. As a way to promote mental health and unity, the crowd was instructed to hug their neighbor with kind words before they departed and continued their day. Living with grief on their backs, the silent protest was able to relieve the students of some of that heavy load and replace it with knowledge and love.