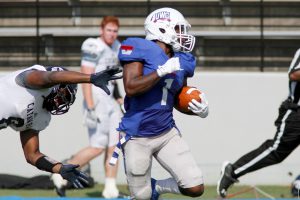 The UWG Football team is poised for a successful season following two seasons that ended in losses deep in the playoffs. Many new faces return for the Wolves as well as a number of highly touted new members of the squad.

The defense of the Wolves, which is returning most of its starters from 2015, is expected to improve and be one of the best defenses in the country. With depth and experience along the defensive line and secondary, the Wolves are expected to give opposing offenses little room to run. UWG also added talented defensive end Jason Hatcher, who transferred from the University of Kentucky. Hatcher will continue to help a defensive line grow that Head Coach Hall says “can compete with any other defensive unit in the nation.”

UWG also added AJ Leggett, a safety who transferred from Marshall. The senior joins an already talented secondary that will back up the defensive line.

“Leggett, along with senior teammate Laronji Vason, will play the Rover safety spot for us, and the competition is really close between them,” said Hall. “We expect AJ and Laronji to help us out a lot.”

The Wolves will have a plethora of weapons on the offense, headed by a three-headed monster at running back. The trio consists of senior Lamarcus Franks, sophomore Devontae Jackson and sophomore transfer Josh Thomas. Thomas, the 230-pound transfer from Iowa State, presents a more physical style of running than the smaller Franks and Jackson, who weigh 150 and 170 respectively.

“We’re very excited about Josh and the running backs as a whole,” said Hall. “Josh is coming off a really good freshman season at Iowa State, and we are excited to see what he can do here for us.”

With quarterback Dallas Dickey leaning due to graduation, Hall brought in Will Gardner, a former quarterback of the Louisville Cardinals. Gardner, Louisville’s starting quarterback in 2014, played an impressive first seven games before a knee injury against Boston College ended his season. The graduate student looks to improve the passing game to supplement the potent rushing attack.

“Will has a different skillset than Dallas, so there are some different things we might get to try this year,” said Hall. “It’s all about what the defense gives us. We have a lot of talent, and we can be successful.”

The Wolves dominated their season opener against Catawba 23-3.

The Wolves will next take the field at University Stadium for the first Conference game of the year against Delta State. Kickoff is set for 2:00p.m..