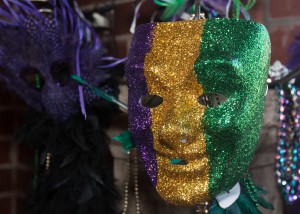 Mardi Gras, a worldwide holiday on Feb. 9, marks the beginning to Lent, a 47-day period of fasting and religious observances that end on Easter Sunday. Mardi Gras, which is also known as Shrove Tuesday, is “Fat Tuesday” in French. It is a day meant for people to feast on rich, fat foods and overindulge before Lent begins.

The city of Bowdon is hosting their second Mardi Gras festival on Feb. 6 at R.S.V.P. at Bowdon station, a 6,000 square feet facility.

The festival will follow many of the Mardi Gras traditions, such as the beads and masquerade. Colored beads will be given out at the door and are meant to be thrown to people who exhibit the color’s meaning. Purple beads resemble justice, green beads resemble faith and gold beads resemble power. The masquerade is another famous custom; masks were meant to allow people to escape social constraints and mingle with members of different social classes and become whomever they desired. Masks will also be handed out at the door.

The appointment of a king, or Rex, the Latin word for “king,” is another closely observed Mardi Gras tradition. A DJ will announce a king and queen for the festival, and event tickets will serve as the ballot for voting.

The festival begins at 7 p.m. with food and drinks, primarily hors d’oeuvres, the traditional food of Mardi Gras. Cocktail attire is strictly enforced; men are suggested to wear a casual suit or a button down shirt with slacks, and women should wear either a pantsuit or a cocktail dress.

Throughout the evening, small businesses will give away door prizes. A cash bar will be open and feature the Hurricane drink along with other alcoholic beverages. Only guests 21 and older are allowed at the festival, and everyone will be required to show I.D. at the door and bar. A live jazz band will play traditional Mardi Gras music along with the DJ playing contemporary music.

The proceeds from the festival will fund improvements in downtown Bowdon, more specifically street lighting and other projects on Bowdon’s work plan. Tickets are on sale at Bowdon City Hall and the Bowdon branch of the Bank of North America. Ticket prices are $30 per individual or $50 per couple.