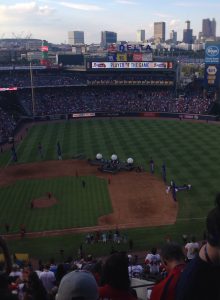 The Braves ended their tenure at Turner Field with a 1-0 win against the Detroit Tigers October 2. The Atlanta Braves had a terrible season and were ranked in the bottom five of the Major League Power Index throughout the entire year, only going 68-93 and last in their division. Though they had their shortcomings this year, this season was about saying goodbye to Turner Field.

Turner Field was built in preparation for the Atlanta Olympics in 1996. It was constructed next to the Fulton County Stadium, which at the time was the home of the Braves. Turner Field was made for the track and field event during the Olympics but would be turned into the baseball field for the Braves at the start of the 1997 MLB season. With the view of the downtown Atlanta skyline just over the outfield, fans were excited to fill the stadium and root on their hometown team.

Once the Atlanta Olympics were successfully completed, “The Ted” was then constructed for the upcoming baseball season to officially be the home of “the team of the 90s.” The Braves were coming off of a 1995 World Series Championship, along with three other World Series runner up finishes. They earned a chance to host their first World Series inside the walls of Turner Field in 1999. In front of a packed house of just over 51,000 for both Game One and Game Two, the Braves lost both games at home in route to being swept by the New York Yankees in one of the most lopsided World Series ever.

Turner Field was once again at the center of the Major League Baseball world in 2000 when it became the venue of the MLB All-Star Game. The first pitch was thrown by the true home run king and former Atlanta Braves Hall of Famer Hank Aaron. The National League team was managed by the Braves’ Hall of Famer Bobby Cox. The game also featured five Atlanta Braves players, including Hall of Fame pitchers Greg Maddux and Tom Glavine. It also featured the fourth All-Star appearance for hometown hero Chipper Jones, who hit the game’s only home run in front of a sold out crowd.

Since the All-Star Game, Turner Field saw the Braves make the playoffs nine more years, including a six year stretch where they won the National League East Division. Through that time they were not only the best in their division, but they were one of the best teams in the entire MLB. On Oct. 5, 2003, against the Chicago Cubs, Turner Field set the record for having the highest recorded attendance for a Major League Baseball Postseason Game.

In 2013, Atlanta Mayor Kasim Reed announced that the Braves were going to be moving away from Turner Field following the completion of the 2016 season. Their win against the Tigers not only ended Turner Field’s time as a baseball stadium but also eliminated Detroit from the Playoffs. Following the conclusion of the game, nearly all of the 50,000 stayed hours later to say goodbye to the stadium they had come to know and love. Hank Aaron threw the last ever pitch to be thrown to Bobby Cox before they picked up the home plate and took it to the Braves new stadium.

“It’s not bad news, or sad news, because we get to remember those great moments over the past twenty years of Braves baseball,” stated Braves Vice Chairman John Schuerholz. “It’s true the final curtain has fallen here, but let’s not forget that the memories that we’ve made here will last forever.”

The Braves will start their season next year at SunTrust Stadium in Cobb County in April 2017. Georgia State University will take over possession of Turner Field and repurpose it into a football field.