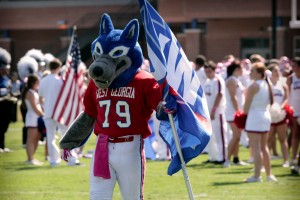 He is present at all sporting events. He cheers along the sidelines. He jumps, dances and poses, keeping the audience pumped and entertained. He even plays jokes with them at times. He is the biggest fan of the University of West Georgia (UWG), and his howls fire the UWG spirit.

He is none other than our very own mascot, Wolfie.

But have you ever thought about who stands inside the velvety plush costume of Wolfie, bringing him to life? Who gets the honor of being Wolfie, representing the school in its truest sense?

Two of the three young men who play the role of Wolfie were interviewed. To maintain anonymity, the interview was conducted via phone and even names were not disclosed. For the purpose of this story, they will be addressed as Wolfie 1 and 2.

Wolfie became the official school mascot in 2006 when we changed from the Braves to Wolves.

“In the ‘80s and early ‘90s, I’m sure there was someone dressed as a Native American,” said Matt Cooke, the assistant athletics director for media services. “I’ve been here since 2001 and from that time ‘till we changed to Wolves, we did not have a live mascot.”

Wolfie is part of the cheerleading program. Just like any other squads, there are try-outs where students are chosen to be Wolfie.

Needing a job, Wolfie 1 grabbed the exciting opportunity. Not only did he become Wolfie, but he also influenced his roommate to become Wolfie 2.

“Seeing how much fun he was having and also the rare opportunity to experience being Wolfie made me apply, too,” said Wolfie 2.

With the exception of the administrators, the cheerleading team and very close friends, those who play Wolfie keep their identity anonymous.

“No one knows who you are,” said Wolfie 1, recalling the best thing about being Wolfie. “You can do whatever you want and not worry about being embarrassed.”

Wolfie 2 agreed that anonymity is one of the best parts. But the perks of being the school mascot only gets better when it comes to putting a smile on others faces, especially kids.

“Once I was called to take a picture with an autistic kid and the look on his face when Wolfie showed up was worth a thousand words, and it was amazing,” added Wolfie 2.

Wolfie 1 was caught in the locker by members of ZinG!, an organization that promotes school spirit and also has anonymous members,

Students can continue being Wolfie as long as they perform their part and their job does not interrupt their academics.

“Sometimes, some of the Wolfie cast had to relinquish their duties due to their busy schedules,” said Cooke. “They are students, and they have to maintain life balance.”

Both Wolfie 1 and 2 agreed that the suit can be extremely hot and uncomfortable.

“Even if you’re not in the mood to be all cheery and excited, once you get into the costume, you have to get into the mood and spread the energy,” said Wolfie 1.

“I hate it when the audience lacks the school spirit,” said Wolfie 2. “I walk in with enthusiasm and try to show the fans some love and energy, and when they don’t return it or choose to walk away, it is very discouraging.”

Being Wolfie is not simply putting on the costume and having fun. While fun is a big element, they also have to play their part, spread the energy and tolerate the heat. The next time you see Wolfie, be a good sport, give him a high-five and show some school spirit. After all, Wolfie would not be the same without his pack.