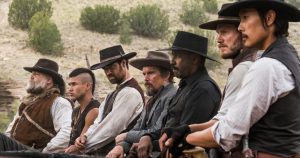 The newest western film The Magnificent Seven was released Sept. 23 and quickly rose to become a box office hit in theatres across America. A remake of the 1960 version, The Magnificent Seven focuses on seven gunslingers hired to protect a village from a corrupt gang leader and his men. It featured several director changes from the original that separated it, but not in a positive light. Instead, the changes made only called out the confusing decision process.

Director Antoine Fuqua took on the 133-minute-long film and immediately separated it from the 1960s version with its racially diverse cast. Unlike the older version with an almost completely white cast composed of Yul Brynner, Steven McQueen and Charles Bronson, Fuqua’s seven fighters featured Denzel Washington, Byung-hun Lee, Manuel Garcia-Rulfo and Martin Sensmeier alongside Chris Pratt, Ethan Hawke and Vincent D’Onoffrio. While Fuqua deserves credit for creating a diverse cast for the seven hired gunslingers, he failed to extend the diversity beyond them. The entire village the seven are hired to protect, the antagonist, the band of gang members and the seven’s employer are all white, unlike the dominant Hispanic cast in the 1960s film that made up the villagers, gang members and men who hired the seven.

Another direct hit to Fuqua’s attempt at producing a positive change is the idea of gender roles. John Sturges, the director for the original film, featured very few females and the one with the most influence was Petra, played by Rosenda Monteros. However, Monteros’ character served as a whiny love interest for Horst Buchholz’s character Chico. Fuqua modernized this by having a woman hire the seven to defend her village instead of three men. Emma Cullen, played by Haley Bennett, seeks righteousness after her husband is brutally murdered in front of her and her village is ransacked by Bogue and his gang. While she serves as a strong female character, especially since she fights, shoots and kills alongside the seven to defend her village, Fuqua destroys this potential successful alteration by having Bennett appear in tight, revealing dresses that were not common in the era. Whether it is low-cut shirts or conforming dresses, Bennett looks more like a prostitute than a fighter compared to her hired help.

The final director’s choice that backfired was the increase in violence. In the original film, there are two major gunfights that do not last long; Sturges spends much of the movie focused on character development, especially building a connection between the seven and the village they are defending. One of the seven named Bernardo O’Reilly, played by Bronson, even befriends the children and is said to be adopted by them.

On the other hand, Fuqua spends most of his film featuring several gunfights, one-on-one action scenes and drawn out battles, specifically between Washington and Peter Sarsgaard, who played the notorious Bartholomew Bogue. The two men get a personal scene in which Sarsgaard is revealed to have raped and murdered Washington’s mother and sisters, a brutal alternate from the original version in that there is no personal turmoil between the two. While the increase in violence and action is more entertaining, we lose this cherished link between the men and the villagers and there is a drastic cut in character development compared to the older version.

Ironically enough, since this calls back to Fuqua’s change in race, the most disappointing scene in the film is a standoff between the two Comanche warriors Denali, played by Jonathan Joss, and Red Harvest, played by Martin Sensmeier. Tension builds as movie goers quickly realize that both sides have a Native American warrior fighting for them and anticipate the showdown between the two. However, the supposed climatic knife fight is over rather abruptly and movie goers are left with a sense of disappointment and unfulfillment before their attention is turned to more violence.

While the remake offers visually stunning scenery, comedic reliefs and an ensemble cast, much of Fuqua’s changes are confusing and appear incomplete.