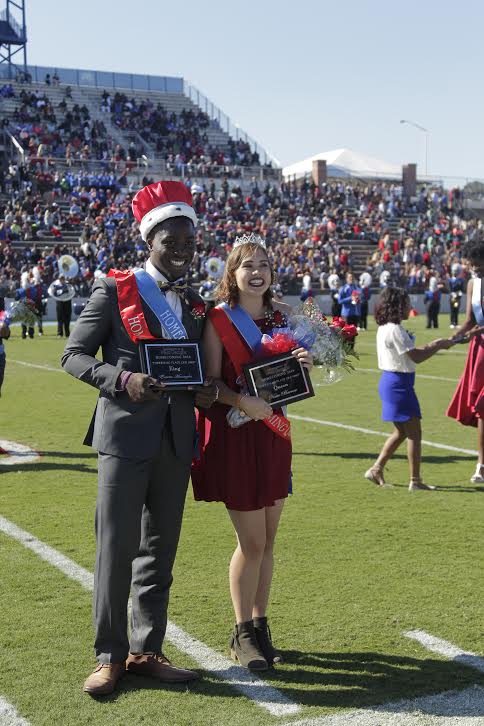 This year’s UWG Homecoming king and queen is Earvin Anumgba and Katherine Barrow. These two people are great leaders and heavily involved on campus.

Katherine Barrow, senior, is majoring in business management and marketing. She is a member of the Alpha Gamma Delta Sorority.

“My chapter nominated me to run for Queen,” Barrow stated. I was so excited to go through the process so I could represent not only my chapter but also the school I love.”

After witnessing the success of Solomon Seaborn, a former UWG Homecoming king, Anumgba was inspired to run. His fraternity brothers of Omega Psi Phi also inspired him to represent their organization.

“I knew one day with my ambition, determination and positive outlook, I would represent them both well,” Anumgba stated.

Of course, members from their sorority and fraternity motivated them throughout the whole process.

“My indubitable motivation came from my fraternity brothers and peers, as they showcased their faith and support I needed during that time,” Anumgba stated. “They gave me that extra push and confidence to continue my perseverance to win the competition. Watching how they took the time out to make flyers, vote, promote and cheer me on during the pageant made me want it more.”

While running for homecoming queen and king, students met other candidates who also are members of great organizations, make exceptional grades and have positive attitudes. During the process, Barrow enjoyed meeting other candidates.

“My favorite part was getting to meet new people. Every candidate was so kind and an awesome representation for the university,” Barrow stated.

However, the winner has to have a unique trait that makes them stand out. Anumgba believes his delivery of communication made him different than others.

“I can adapt myself to different audiences and still ensure that my message is clear and precise,” Anumgba stated. “My exceptional gift of public speaking has not only gifted me with great awards but has given me the ability to captivate my audience.”

Anumgba recommends this experience to others, even if that person has doubts.

“The entire experience is something to appreciate. If you’re anything like me and have never been in a parade or pageant, it was a once in a lifetime opportunity. I just want to say thank you to everyone that helped me see it through and most importantly to God,” stated Anumgba.