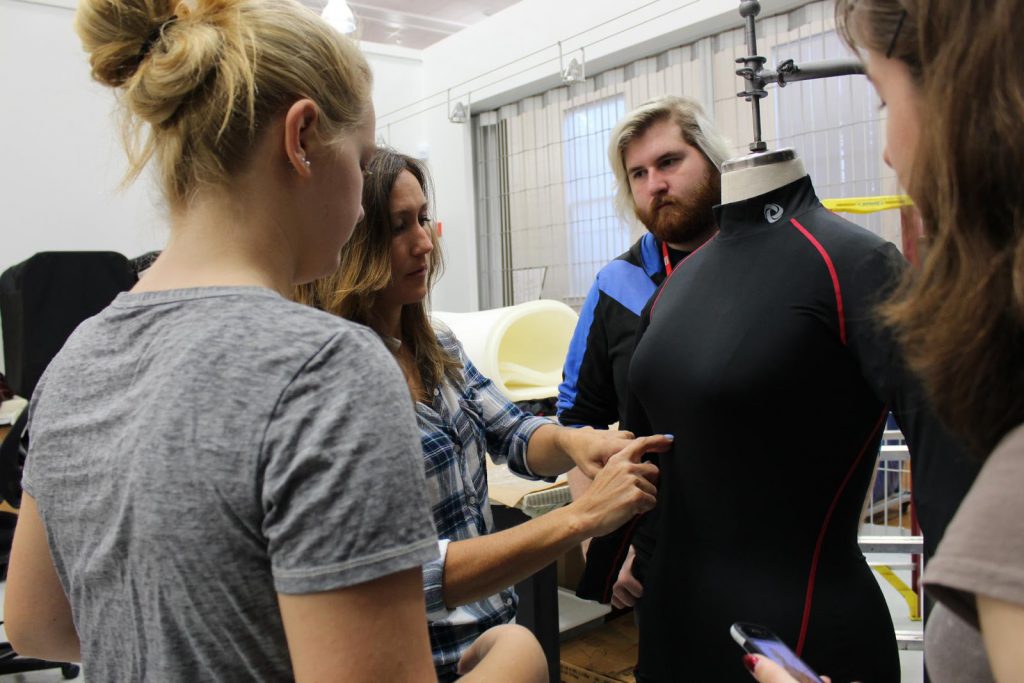 UWG Alumna Dawn Dininger traveled back to her college town to share her experience as a special effects artist at the Carrollton Cultural Arts Center.

Followed by her discussion, she conducted a workshop at the UWG costume shop.

Dininger graduated from UWG with a Bachelor of Fine Arts and moved to California to improve her talents. Eventually, she partnered with notable special effect artists in movies to create costumes, three dimensional figures and fabrication.

At 15-years-old, Dininger had an idea of what she wanted to be in the future. She knew for a fact that she loved horror movies and art classes.

Many artist work in special effects in movies and television without degrees. However, Dininger decided to go to college.

“I still went to school to get a degree and I knew West Georgia had a great arts program,” said Dininger.

After college, Dininger moved to California and was mentored by Devon Ryan, a special effects artist who has done work for “Star Wars” and thrillers including “13th Child” and “Graves End.” She would drive an hour and a half to Ryan’s home every weekend to learn from him and improve on her skill.

“I can keep learning from him forever and it was a point where I had to take a chance,” Dininger admitted.

While she was learning, she was also waitressing, working as a secretary and taking opportunities from smaller companies. Sometimes she would work for free on low budget projects.

There were times where she created costumes for haunted houses. During this time, Dininger focused on building her portfolio.

“My first job was for 3 days, then I waitress for 3 months,” she said.

Eventually, Dininger decided to utilize her skills and advice from Devon Ryan and move near Hollywood to pursue her dream career.

Her goal was to work with Rick Baker and Stan Winston, two popular figures in the special effects industry. Dininger reminisced on the times she read Cinefex Magazine that showcased Winston and Baker’s work.

Ironically, she had the chance to work with both. She also admitted that Winston was hard on her, but when others asked about her worked he stated that she rocked.

Dininger worked as a fabricator for “Jurassic Park III.” She had previous experience in fabricating dinosaurs and she was grateful to have the opportunity.

“I liked Jurassic Park. I can’t wait to make these dinosaurs again,” she said.

After sketching, the dinosaurs were made with foam, molded by clay and covered by latex. Her main focus was putting each dinosaur piece together.

Dininger is known for creating the “Jurassic Park III” dinosaur, Pteranodon. After creating this dinosaur she was responsible for testing footage to see if the dinosaur’s appearance was realistic and detailed.

She was also featured in a Sears commercial where she played as robo granny. She was placed in a robotic suit that was controlled by a remote.

For the movie Pacific Rim, she had to try on a costume and swim in a director’s pool to see if it would float.

“Since I am the size of a lot of actresses, I test that out also,” she said.

Dininger closed her panel by reminding college students how basic knowledge from college can make someone an exceptional artist.

“If you are a great painter now and just getting better, that just makes it easier,” she said. “When you paint a prosthetic or do make up, it all correlates.”