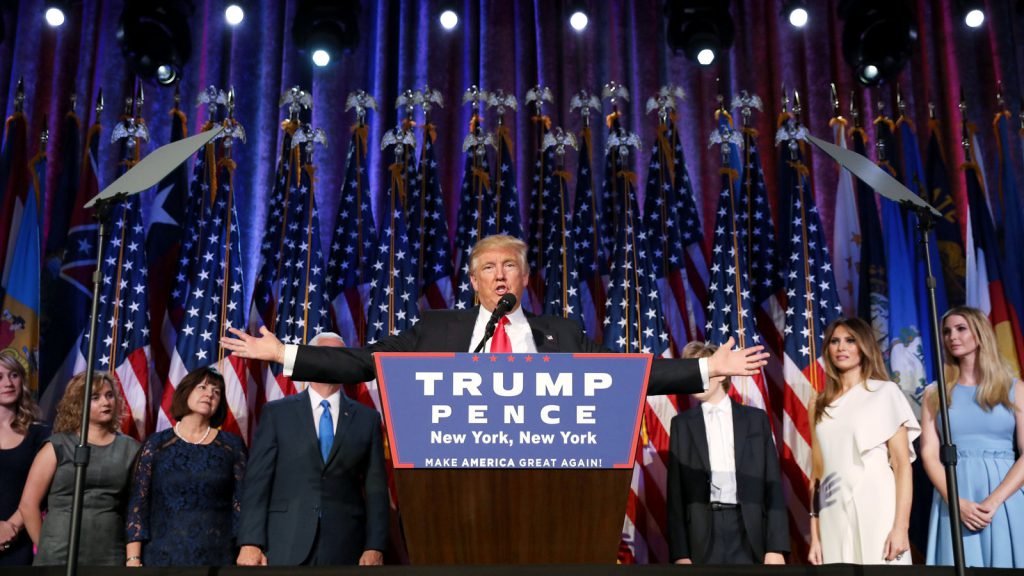 Well, it’s all over. Donald J. Trump, former reality TV star and businessman, will be the 45th president of the United States. He beat former First Lady, senator and Secretary of State Hillary R. Clinton on Tuesday, Nov. 8, during the 2016 Presidential Election. Clinton conceded the election via phone early Wednesday, Nov. 9, and Trump gave his victory speech shortly after. Trump, the oldest president elected to a first term, is also the first president without a military or public office background. Trump won 279 electoral votes, crossing the needed 270 mark with Wisconsin, while Clinton received 228 electoral votes.

These close numbers were seen in the state’s voter numbers as well. Trump won seven of the 11 swing states, including Florida, Iowa, Michigan, North Carolina, Ohio, Pennsylvania and Wisconsin, all being major key battleground states. However, of the 11 swing states, seven were within one to two points of going to the other candidate. Florida, Michigan, Pennsylvania, Wyoming and New Jersey were within one point of switching parties while Colorado and Nevada were within two points. Even non-swing states, like Maine and Minnesota, were close calls, with Maine being within almost 22,000 votes. Florida, the first of the 11 swing states to have votes tallied, was an ongoing battle between the two candidates before being announced a victory for Trump, a must-have in order to help him win the presidency.

Overall, turnout rates for voters was the lowest since the 2000 election. Only 112 million Americans voted, and people under 30 made up only 19 percent of that vote, according to the New York Times. While Clinton showed a slight lead in the polls prior to election night, it wasn’t enough to guarantee her the presidency, which would have made her the first female president.

Reactions from Clinton, Trump and current President Barack Obama appear to call for unitedness. While Clinton was originally scheduled to deliver her speech at the Jacob Javits Center following Trump’s acceptance as president, she eventually delivered her concession speech the next morning on Nov. 9. She offered to work with Trump but expressed her sorrow in losing the election.

“I am sorry that we did not win this election for the values we share and the vision we hold for our country,” said Clinton in the Grand Ballroom of the New Yorker Hotel. “Being your candidate has been one of the greatest honors of my life. This is painful and it will be for a long time.

“Donald Trump is going to be our president,” continued Clinton. “We owe him an open mind and a chance to lead. I hope that he will be a successful president for all Americans.”

Obama also expressed these thoughts when he gave his speech from the White House’s Rose Garden. He announced his congratulations to Trump as well as his invitation for Trump to visit the White House to guarantee a “successful transition” in presidency.

“We are all on one team,” said Obama. “We are Americans first.”

While Obama expressed his pride for Clinton and her “historical” campaign, he did acknowledge the fierceness of the presidential election and shared a message with millennials.

“This is the nature of campaign, the nature of democracy – it’s hard,” explained Obama. “Stay encouraged. Don’t get cynical. Don’t ever think you can’t make a difference.”

“It is time for us to come together as one united people,” stated Trump. “No dream is too big, no challenge is too great. Nothing we want for our future is beyond our reach.”

Trump even called for some peace and cooperation.

“We will seek common ground, not hostility; partnership, not conflict,” said Trump. “While the campaign is over, our work on this movement is now really just beginning.”

Trump ultimately pledged to “be president for all Americans.”

However, all three speeches have not gained as much attention as CNN political commentator Van Jones when he expressed his hurt at the “whitelash” seen with Trump’s election.

“Donald Trump has a responsibility tonight to come out and reassure people that he is going to be the president for all the people he insulted and offended and brushed aside,” concluded Jones.

Jones is not alone is expressing his fear for the future of this country. Only time will show if Trump moves to eradicate Obamacare, build a wall against Mexico and call for a “total and complete shutdown of Muslims entering the United States,” three significant topics that were controversial between Trump and potential voters. His economic, social and ethnic nationalism will either grow or dissipate over the coming months.

This presidential election, one of the most disputable in our country’s history, focused on Trump’s eccentric personality and many disrespectful statements and Clinton’s continued FBI investigation into her emails. It eventually came down to the 70-year-old celebrity beating out Clinton throughout a close presidential election. We shall have to wait and see if Trump will indeed follow through on his numerous promises to “make America great again.”