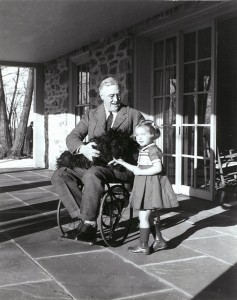 Starting February 11th, Ingram Library will be host to the “FDR: His Vision, Our Freedoms, Still Alive” national exhibit. The exhibit is a traveling exhibition developed by the Franklin D. Roosevelt Presidential Library and Museum, and is presented by Ingram Library’s Penelope Melson Society. The exhibit will include photographs, documents, and other personal items from Franklin D. Roosevelt’s presidency.

President John Ferling, President of Ingram Library’s Penelope Melson Society, says the exhibit should help bring more awareness to one of our most popular presidents. “A poll of professional historians conducted a few years ago rated FDR as the second most important American president, after Lincoln but ahead of Washington. The Melson Society hopes to make students aware of the Roosevelt presidency, his ideas, and his leadership style,” said Ferling in an interview via email. “We also are committed to making the Ingram Library the hub of the campus, impressing on students the importance of libraries, not just as a resource for completing course requirement, but as places for lifelong learning and enrichment. “

The Melson Society wants the impact of the exhibit to reach outside of campus. “One of the Melson Society’s goals is to try to bridge the gap between academe and the general public. We hope to bring people from the wider community in West Georgia, who would ordinarily never set foot on the UWG campus, to the Ingram Library, and the campus in general, to view exhibits and listen to scholars in speak in conjunction with the exhibits,” said Ferling. “I think this will be one of the most important exhibits ever displayed at UWG.”

The exhibit will run from February 11th to March 8th.  Also, at 7:00 pm on the 21st, Professor Allan Winkler, of Miami University in Ohio, will be speaking about President Roosevelt. The exhibit is free and will be open to the public. As for future exhibits, Ingram Library has plans to sponsor an exhibit on Alexander Hamilton next fall, and one on Abraham Lincoln in the winter of 2014.