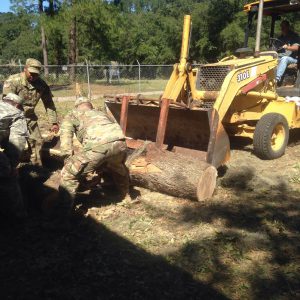 Local cadets from the Georgia Military College (GMC) recently returned from their mission of providing hurricane disaster relief due to Hurricane Matthew. Hurricane Matthew’s widespread destruction has mobilized numerous relief organizations such as The American Red Cross and FEMA to assist those affected. GMC sent 25 local cadets to assist the relief effort in Effingham County, Ga., to help citizens deal with after effects of the storm like supplies shortages, lack of clean water and downed trees.

The Academy, located in Milledgeville, dispatched their squad on Operation Water Magnolia after the dangerous part of the storm had passed. The cadets, along with FEMA, teamed up and distributed 50,000 bottles of water over 6 days. Alexis Marroquin, Carrollton resident and Army National Guard Specialist and his 24 comrades were dispatched to Effingham County, where cleanup and assistance were greatly needed.

“We gave away about 10,000 bottle of water on the first day alone,” said Marroquin. “People just kept coming looking for clean water. That was the biggest issue because Matthew’s rain dirtied the water supply.”

The torrential downpour from the tropical system caused flash flooding not just in Effingham county, but all across the southeast coast. All of Effingham’s bodies of clean water became tainted by the runoff from all the rain flowing into the water supply and backing up the sewage.

Water, both rainwater and drinking water, were the primary concerns for citizens dealing with the effects of Matthew. However, they also had to deal with many other issues that come with a storm of such magnitude: power outages, downed trees, injuries etc.

Downed trees were a major problem in Effingham county. Falling trees can potentially bring down power lines, block roadways, or fall on buildings. Several trees were knocked down on and fell on Effingham Middle School in Guyton, Ga. Fortunately, the building was not severely damaged and the biggest issue at the middle school was the big mess.

“We were sent out in shifts to do certain missions we were assigned,” said Marroquin. “Sometimes we would go help clean up downed trees, other times we would distribute water. We also went through the residential neighborhoods checking to make sure nobody was trapped or hurt.”

As with any state of emergency, the disaster relief team was ready for anything Matthew could have thrown at them. An emergency medical shelter was set up, but fortunately it was not needed as there were no life threatening injures sustained in the area. Relief effort are still underway, as damaged homes and businesses will take a long time to recover. Thankfully, the worst of it is over.