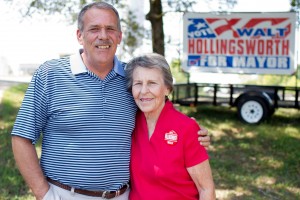 Off a dirt driveway on Kingsbridge Rd. are the offices of local Carrollton business Hollingsworth Concrete. The current Hollingsworth to run the family business is Walt; a silver haired, Southern gentleman, who hopes to serve his hometown well as the newly elected mayor of Carrollton. Hollingsworth has watched the local college grow into an influential part of his beloved town, and as mayor one of his main ambitions is to further cultivate the relationship between the students at UWG and the Carrollton community.

In a runoff election against Mike Patterson on Dec. 1, 2015, Hollingsworth won the coveted title of mayor 1009-869. This victory came as a relief to Hollingsworth, who lost the mayoral race in 2011 by a mere 15 votes.

“Four years ago, it was sort of just a bucket list thing to do,” Hollingsworth admitted. “I’d always thought about it, and thought I was getting a bit old and if I was ever gonna do it I may as well just go ahead. Then once I got into it, I liked it, and I saw a bunch of stuff that I thought maybe I could make a difference in.”

To achieve his goal of connecting campus to community, Hollingsworth will be partnering with the UWG Student Government Association (SGA). In collaboration with SGA President Chance Grzesik, Hollingsworth hopes to engage the student body at UWG and get them more invested in local politics.

“I think it’s awesome that Mayor Hollingsworth actually reached out to SGA and wants to establish a relationship that could possibly engage more students in the Carrollton community,” said Grzesik. “In the first few weeks of his term he’s already contacted us and is wanting to build the foundation for future partnerships, which is something that to my knowledge we haven’t had with previous mayors.”

Perhaps the largest endeavor of the partnership will be determining a “safer ride home from [Adamson] Square,” which both Hollingsworth and Grzesik hope will decrease the number of student DUIs on Thursday, Friday and Saturday nights.

“My goal for the collaboration is to see students travel safely from the Square to campus and to avoid the potential dangers that arise when students do choose to drink and drive,” said Grzesik. “It could have a positive new element to the Carrollton life, especially for those who love to go out to the Square and like to have a good time.”

In addition to the joint efforts with SGA, Hollingsworth also suggested UWG students involve themselves through the public comments section of city council meetings. The first few minutes of every meeting are dedicated to community voice and allowing guests to express their concerns, but few people actually come to participate.

“The more [students] who show up and make comments during the public comment section, the easier it’ll be to get the board more interested with what the college has going,” said Hollingsworth.

Hollingsworth also hopes through involving themselves in local affairs students will gain an appreciation for the town in which they spend four – sometimes five – years of their lives, which may in turn persuade them to stick around after they graduate.

As a local business owner himself, Hollingsworth holds the small-town atmosphere Carrollton offers at a high standard and sees the possibility of UWG students and alumni continuing the economic growth through local businesses.

“The backbone of this town is local grown businesses,” stated Hollingsworth. “The small entrepreneurs who want to do something on their own that’s where the real character comes from – not the big chain stores you can find in any town.”

The potholes around Carrollton affect many students on their commute to and from the campus, and Hollingsworth is addressing the issue with the City Council.

“We’re working on the infrastructure,” said Hollingsworth. “We have to get a lot of the underground infrastructure put back in – it’s aged up. So we’re addressing getting everything underground fixed so we can come back in and fix the tops of the road.”

Another concern from UWG students Hollingsworth is looking to tackle is the increase in gun violence around campus. Following three shootings in December at Rivers Edge Apartment Complex, Haven West Apartment Complex and LocoMex Downtown on Adamson Square, students are concerned about going out with their friends or even going home at night.

“We’re going to take some action at the next board meeting to start taking down some of these old, dilapidated, blighted houses that some of these drug lords and folks might be hanging out in,” said Hollingsworth. “So we’ll see if we can’t start cleaning things up here.”

Even with the recent shootings, Hollingsworth thinks Carrollton is a safe community ideal for a prominent university such as UWG.

“It’s small town, but it’s big enough to get you in trouble,” joked Hollingsworth. “Wander ‘round and enjoy what we got. Go out to Tanners’ Peaks, go out to the horse park on Highway 113 or Macintosh to play in the river. It’s here, you just have to be willing to get out of your comfort zone to find it. There’s a lot of good wisdom in this town and if you get to know some of them they’ll take a shining to you, as we used to say.”