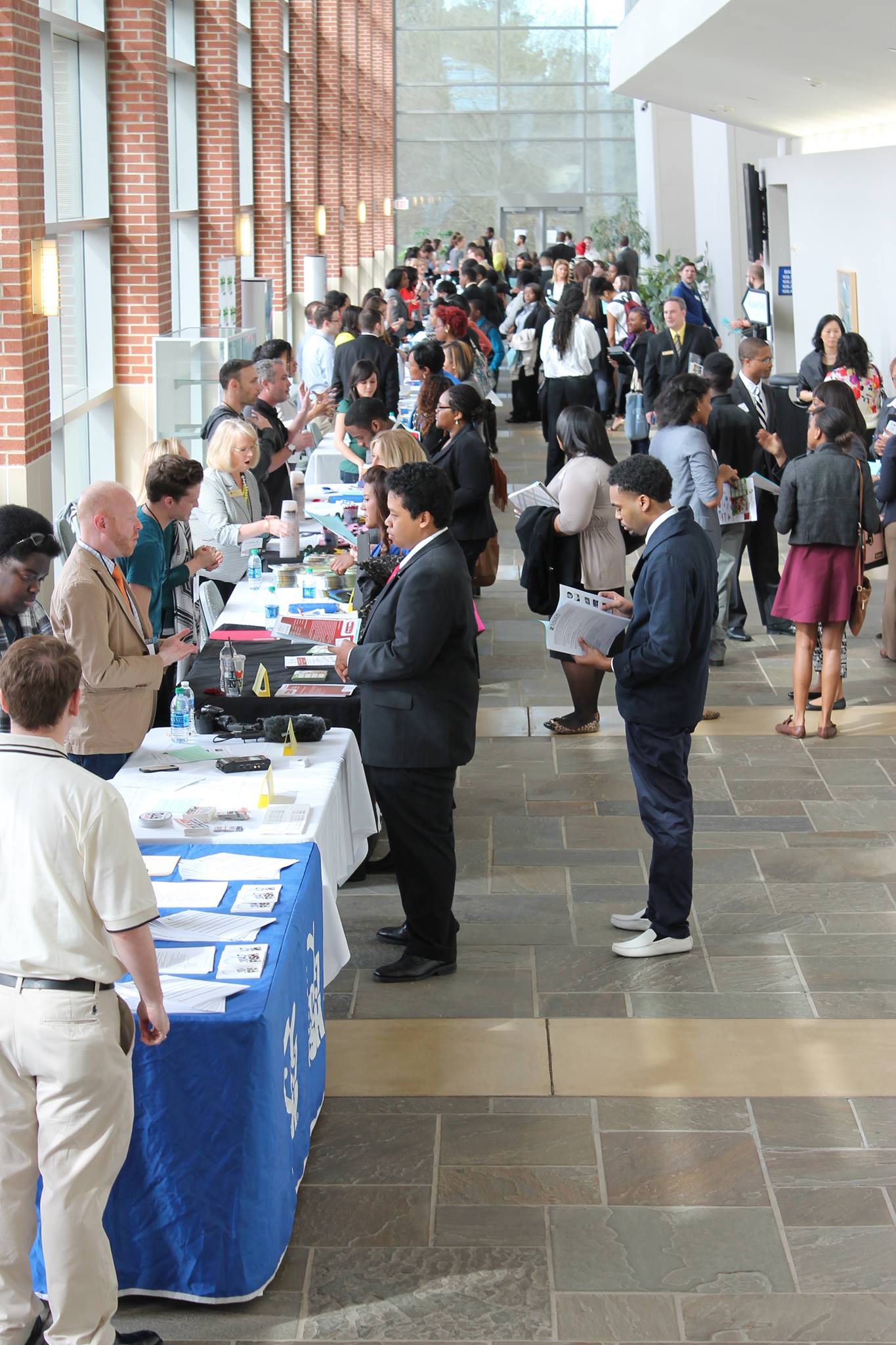 Both Cole and Renaud, along with the rest of the Media Day committee, arranged and promoted Media Day to the students, alumni and media professionals through the use of social media sites such as Facebook, school websites, email and direct mail encouraging attendance and participation in this year’s event.

“This year we experienced a big increase in the number of student, alumni and professional participation,” said Cole. “Media Day continues to grow each year, which is very exciting.”

Over 70 area media professionals, most of them UWG alumni, participated in networking at the event. UWG students circulated among these visitors, establishing professional contacts, getting career advice and learning about their fields.

The Media Day event began with a panel discussion featuring five professionals from different media disciplines. The featured panelists were Beth Carter, Director of CNN Newsource, Maya Table, Executive Producer/Director at Sam Frank Productions (a film and video production company), Tiffani Thomas, Account Manager for public relations firm Jackson Spalding, Casey Tate, executive Producer for radio station Star94, WSTR 94.1, and Jim Burress, Host/Reporter for WABE, Atlanta’s National Public Radio affiliate.  The panelists were all asked questions about their professions and how they got to where they are today by moderator Professor Deon Kay, who specializes in Film and Media Arts. Then the floor was opened to students who directed questions to individuals or to the whole panel. After the conclusion of the panel, students were encouraged to head to the concourse where the professionals were set up for the networking session.

“As a committee, we have cultivated relationships with alumni and diverse professionals in various industries. These connections are professional friends and contacts who support us and our students,” said Cole, “They are so kind to support us when we extend an invitation to grow and support our students by making themselves available. They also seek opportunities to provide internships and sometimes employment to our students and graduates.” Students eagerly networked with alumni and the other media professionals about their careers and what advice they could give to students looking for internships or those who are entering into the job search.

The honors luncheon followed the networking event where Alumni Nuria Baldello-Sole, Associate Director of Social media at Razorfish.com, from the graduating class of 2003, was honored with the Distinguished Alumni Award for her expertise in Public Relations. Although, Baldello-Sole was unable to attend the luncheon, she sent her thank you speech and expressed her gratitude for not only the award, but for the University as a whole.

The Keynote speaker Beth Carter, Director of CNN Newsource, spoke about her career and what she did to get where she is now and what is most important to her in her job everyday. Following Carter’s address, the Department of Mass Communications Excellence Awards were presented to five students in each of the concentrations of Mass Communications. Awards were given to Kaley Clayton for Public Relations, Chadwick Brock and Amber Dees for Film and Media Arts, and Darryl Forges and Kathleen Sturgeon for Convergence Journalism.

Almost everyone associated with the Department of Mass Communications was present at the event—students, professors, administrators and staff alike. Media Day 2014 was broadcasted by The WOLF Internet Radio and filmed by a crew from UTV13. Students and faculty from Public Relations (including the team from bluestone, The UWG Student Public Relations Firm) and Film and Media Arts were also well-represented. Media Day was a day of celebration, lauding student scholastic achievement, extracurricular activity, scholarship recipients and the administration of the department.

“Our students have expressed their gratitude and excitement for a successful event,” said Cole. “I’ve only heard positive remarks (in writing and in person) from many students, alumni, colleagues, and faculty members who attended.  If this is any indication of satisfaction, I’m quite pleased.”

With the increase in turnout from both students and Media Professionals, Media Day 2014 was a smashing success. Professors Cole and Renaud will co-chair the Media Day event again next year. They are even more ambitious for next year’s event—but the proverbial “bar” has already been set high.

“It’s always a challenge to make something better when you are pleased with your results,” said Cole. “Overall, we had a successful event and I can’t wait to do this all over again.”