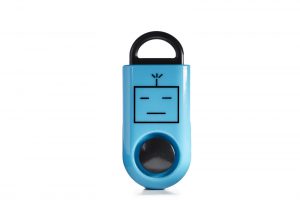 A simple yet effective device is helping university students nationwide protect themselves in crime situations.

A small device called The Sound Grenade is rapidly making its way across the U.S. Created by the company ROBOCOPP, it is a small, sleek device that can be worn as a keychain, is easily accessible and easy to use.

The Sound Grenade is the world’s smallest alarm, but is helping college students in a big way. Over 100 college campuses nationwide have handed Sound Grenades out to students and the company has seen numerous success stories with the device.

“I had a girl tell me about how the Sound Grenade helped her,” said PR Director of ROBOCOPP Jill Turner. “A man came up to her asking for her money with a gun and he ran immediately when she activated her Sound Grenade.”

According to the International Institute of Criminology of Montreal, about 70 percent of armed robbers flee after the alarm sounds. Another study by UNC Charlotte Department of Criminal Justice and Criminology showed that around 80 percent of criminals check for an alarm before taking action. Both studies prove that alarms are one of the most effective crime deterrents.

Unlike pepper spray, Sound Grenades are non-violent crime deterrents that cannot be used against the victim. By removing the top cap off the device, the device lets off a piercing 120-decibel alarm. Inserting the cap back onto the device will shut it off.

“It is a simple idea that works,” said Turner.

The San Francisco based company was created in hopes of a crime-free society. The company hopes to protect and provide to the public a small and effective crime deterrent.

“The idea for ROBOCOPP came about with a crimeless utopia in mind,” said Turner. “We felt like the name ROBOCOPP embodied our vision well.”

The company created the Sound Grenade in hopes of preventing crime before respondents could be called to the scene. The result of the device is meant to be immediate.

ROBOCOPP was started roughly two years ago and released The Sound Grenade almost six months after. The device is new, but has grown rapidly in popularity within the span of one year.

CEO of ROBOCOPP Sam Mansen came up with the idea with his younger sister in mind. He wanted her to have a safe college experience.

Since the company is fairly new, ROBOCOPP has big plans for the future. The company could not release to the public what they are working on, but Turner said something is happening soon.

“There is lots underway,” said Turner.

The company has received the most feedback from parents of college students and users of the product wanting the device to send out a text message when activated of the user’s location to an emergency contact or to alert the police.