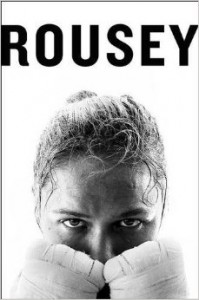 If you do not already know who Ronda Rousey is, make no mistake, you will now. After Rousey’s knockout by Holly Holm to defend her UFC Champion title, fans is fascinated to see where Rousey will go next. Previously undefeated, Rousey had a streak of 11 wins all within the first round. The champ either took fighters out via her signature arm bar or technical knockout (TKO).

Rousey’s book, My Fight/ Your Fight, written before the famous knockout, gives readers a special glimpse into how she is as a person.

“When people say, ‘Oh you’re so cocky, you’re so arrogant,’ I feel like they’re telling me that I think too highly of myself. My question for them is, ‘Who are you to tell me that I need to think less of myself?’” Rousey wrote in the chapter “When Do You Cross the Magical Boundary that Stops You From Dreaming Big?”

This is probably when I fell in love with Rousey. She is right; who are others to tell us to think less of ourselves? Then again, the starlet has earned it. She always trains to push herself and beat any girl in her way and to beat them by a long shot. Rousey is so unapologetically honest in her book that I not only related to her, but I felt inspired to apply some of her life lessons to my own life.

Each chapter begins with a sort of monologue from Rousey presently, looking back on the events that led her to where she is now. Rousey endured many struggles: the death of her father, losing the Olympics, working three jobs, trying to make ends meet and having relationships with men who made her question her beauty due to her stature.

Reading the book, it became evident that both Rousey’s love for her father, who killed himself when she was eight years old, in addition to her desire for her mother’s approval, helped to push her to become the woman she is today.

As a child, Rousey’s mother was away on business and she decided skip school. She hopped over a fence and broke her leg. The next day, she had a Judo competition. She knew her mother would be disappointed if she did not go. Rousey’s mother always instilled in her that she had to beat her opponent twice, even on her worst day. Needless to say, she lost and revealed to her mother what she had done. Her mother laughed and grounded her; she said Rousey should never have fought on a broken leg.

Rousey relays events with incredible detail and several curse words. Rousey, on paper, is a true fighter. She describes what she does to her opponents and how she demolishes them mentally before even walking into the octagon.

The title of her book says it all. My Fight/ Your Fight inspires others to never give up despite their circumstances and to fight every second to the best of their ability. I really enjoyed the book through Rousey’s perspective; I got a different view of her other than from her beat downs and cocky interviews. I enjoyed the book not only because I am a Rousey fan, but because she has some amazing one-liners that really resonate with the reader even after they put the book down.