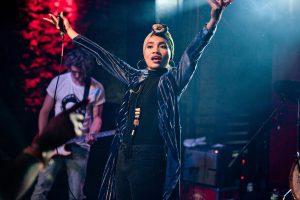 Do yourself a favor: go see Yuna live.

The Masquerade’s Hell was sold out on Friday, Oct. 7 for good reason: Yuna’s Chapters Tour was in Atlanta. Doors opened at 7 p.m., and the show started at 8:30 p.m.

Opening the show was Chicago native Ń ÿ ł ø, who kicked off her set with a slow track, releasing positive mellow vibes throughout the venue. She performed tracks from her 2013 EP Memories Speak and single tracks “Take It Back” and “Fool Me Once.” Ń ÿ ł ø set the mood with a sound careening production of the Weekend and echoing the smooth pop vocal confidence of Keri Hilson or Ciara. Ń ÿ ł ø played and sang all the right notes that made the crowd listen with attentive ears. Her set was fantastic and left them wanting more the minute she exited the stage.

After her set, the wait was not long before the Malaysian singer-songwriter appeared in front of the Atlanta crowd. Smiles, cheers and “I love you’s” were directed towards Yuna, and Yuna did the same. She kicked things off with a track on her recent album Chapters, “Places to Go,” which was followed by “Best Love.”

After each song Yuna talked and joked with the audience.

“This will be my last song of the evening,” she said. “Just kidding.”

The atmosphere at the concert was very peaceful and laid back. She has this organic, serene aura that took over the whole audience. Throughout the night, Yuna performed songs from her first two albums and new material from her recent third album.

A special moment throughout the whole show was when she told the audience to settle down. Here she serenaded the audience with “All I Do,” a song about that moment after a breakup, with only a soft guitar accompaniment. The entire venue stood in awe and silence.

Yuna closed her set with a powerful performance of “Crush.” The crowd sang at the top of their lungs and featured artist Usher came onstage and surprised Yuna and the audience. The crowd went wild as Yuna and Usher sang the duet. The audience sang backup, singing every harmony and adlib in the song.

After the song, she thanked everyone and exited the stage. Not long after, the crowd chanted “Yuna! Yuna!” and she and her band reappeared on the stage for an encore. She officially ended the night with a lively performance of “Live Your Life,” an empowering and selfless tune. She took a bow and thanked Atlanta for a wonderful night.

Yuna is truly an incredible artist who enjoys sharing her music with everyone, and it was proven with this show. She is an artist who can bring all cultures together in one room to enjoy live music. I look forward to seeing her again. As for the Masquerade, concert goers bid farewell to the 117 year old building as it is moving to it’s new location at Underground Atlanta.