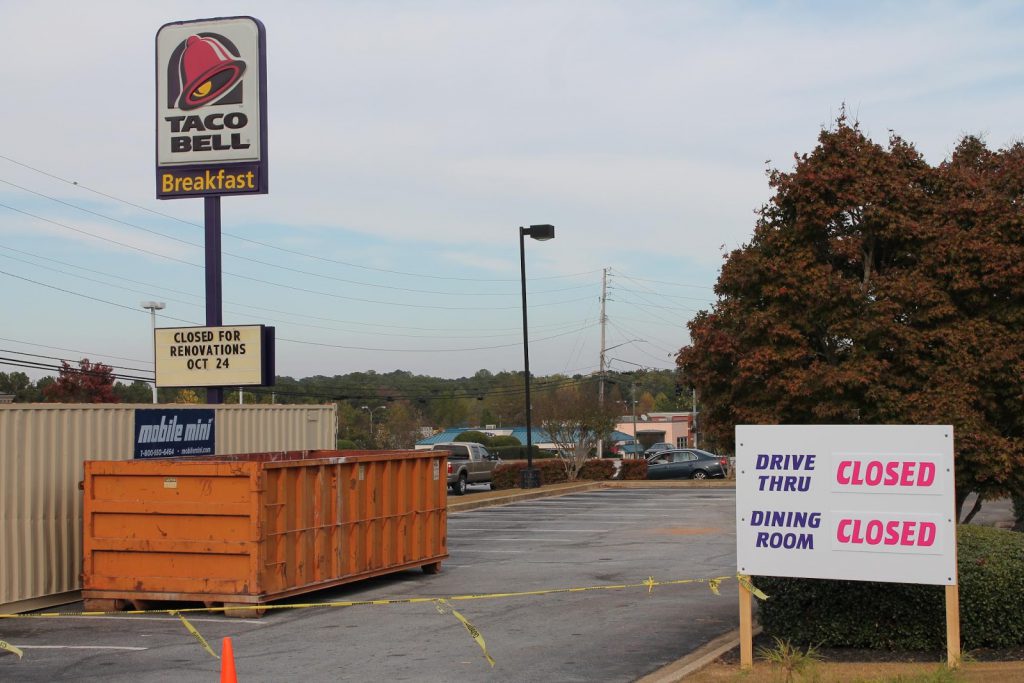 Taco Bell in East Carrollton closes for its second remodel. On Monday, Oct. 24, the establishment was seen with “Closed for Remodel” on the Taco Bell sign post. CW Hayes will complete the remodel, and workers have been seen on the premises. The Taco Bell “Bell” has already been removed.

Kathy Evans, the assistant manager at Taco Bell, said the building needed another remodel. The first remodel occurred some time in 2015.

“The building was outdated and needed to be updated to a more modern look,” said Evans. “Unlike the previous remodel, this one includes the kitchen.”

Evans is not completely sure on the extent of the remodel.

“I know the dining area will be more open and completely repainted with all new flooring, tables and lighting,” said Evans. “The repainting also includes the outside, entire kitchen area and the ceiling is being replaced or repainted.”

According to demolition plans found online, everything in the dining area will be removed and replaced with new furnishings. The building will be painted a Grizzle Grey, Iron Ore and Natural Choice. The floor plan will be open with a bar and family style seating.

According to Taco Bell’s Newsroom, in May, the fast food chain released that it is testing four new restaurant designs – Cali Sol, Urban Edge, Modern Explorer and Heritage – as part of their expansion plan to be more locally focused. The designs include features like exposed brick and faux fireplaces.

“I think the remodel will be better for the community,” said Evans. “Our business has been increasing, and I think, with a more modern look, it will definitely be an attraction, especially being located in a college town.”

Hopefully the new remodel will be one of the four that Taco Bell has unveiled. As of now, the Taco Bell on Bankhead Highway remains closed until the kitchen is ready, then they will reopen partially for drive-thru service only. Evans gave an estimate as to when the kitchen and eating area will be complete.

“We’re hoping the timeline for the kitchen will be another week, then another three weeks to finished our dining area,” said Evans.

The chain is set to reopen after Thanksgiving, but it may take longer with this extensive remodel. As for now, visit the second Carrollton location on Highway 27 across from Walmart to fulfill those late night cravings.