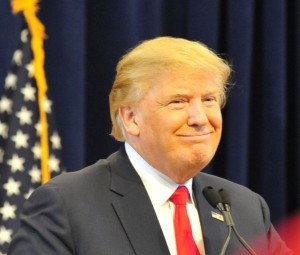 At first, it was funny – the thought of business tycoon Donald J. Trump running for president. It seemed he just wanted to prove he could do it again, after having given up his chance in the 2012 elections. Then, slowly, people started taking him more seriously. Now, he’s practically running the show for the Republican Party, and it’s time we stopped giving him that authority.

With the campaign slogan “Make America great again!” Trump capitalizes on many citizens’ disapproval of the current government and their nostalgia for a time in which – they believe – America was great. But in order to return to this so-called greatness, Trump plans to basically whitewash America.

At the low cost of $30 billion, Trump plans to build a wall protecting the border with Mexico. Given our current national debt of over $18 trillion, this money could be spent on far more substantial endeavors, which is why Trump suggests instead of paying for it ourselves, we should force Mexico to pay for the wall. Definitely a way to foster good international relations with our Southern neighbor.

Since announcing his candidacy, Trump has been blatantly racist towards nearly every minority, threatening to deport nearly 11 million undocumented immigrants currently living in the US. Even after being reminded of the legal barriers that would stand in his way, Trump remained confident he would achieve his goal.

But his offensive behavior doesn’t end there; following the New Years’ attacks in Cologne, Germany, Trump’s official Facebook page posted a status reading “Germany is going through massive attacks to its people by the migrants allowed to enter the country. New Years Eve was a disaster. THINK!”

The post generated much debate in the comments regarding the current refugee crisis in Europe, one in particular from a popular German comedian sarcastically replied “Greetings from Berlin! We Germans are happy to help and will give any American refugee who wants to flee from the U.S. in case Donald J. Trump becomes President.” With over 265 likes on the comment and 41 comments, it’s safe to say some international citizens found humor in the response.

Trump demonstrated his overwhelming arrogance most recently at a campaign rally in Iowa on Jan. 23 when he declared, “”I could stand in the middle of 5th Avenue and shoot somebody and I wouldn’t lose voters.” The sad fact is, he probably isn’t wrong. Despite his countless slanders against every category of people except rich, white males, Trump currently leads the GOP field with 41%. – nearly doubling the next highest candidate Texas Sen. Ted Cruz, who currently polls at 19%. Rubio, Carson, Bush and Christie all remain in single digits. How has someone so brash, tactless and offensive managed to hypnotize the American population this far into the president elections?

It’s simple, really; he’s not taking his presidential candidacy seriously. But the American people are, and therein lies the problem.

Regardless of if Trump’s campaign is a publicity stunt, the support shown to him by the American people is mind-boggling. This is a presidential election – not a reality TV show – and we need to start only allowing serious candidates to hold the spotlight.