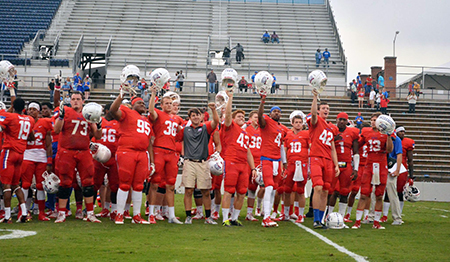 After defeating the University of North Alabama (UNA) Lions, the Wolves completed what would be their last victory over a ranked opponent this regular season. The University of West Georgia (UWG) Wolves continued its streak of dominance by solidifying its position as the highest ranking team in the AFCA, D2Football.com and Super Region 2 rankings.

Although the team has not finished the season yet, the ability to accumulate the amount of momentum this group has been able to generate is staggering. It also provides some perspective as to what the Wolves would be capable of in the post-season.

Just a season ago the Wolves were given a fresh start with a brand new coach and coaching staff. Since making the decision to bring on Will Hall as head coach, the Wolves’ football program has exceeded expectation and fulfilled every goal.

Coach Hall’s first benchmark was making it a habit: defeating UWG’s biggest in-state rival, the Valdosta State University Blazers. The goal seemed achievable, they are a rival, however the Wolves hadn’t defeated the Blazers since 2011, prior to Hall’s arrival. 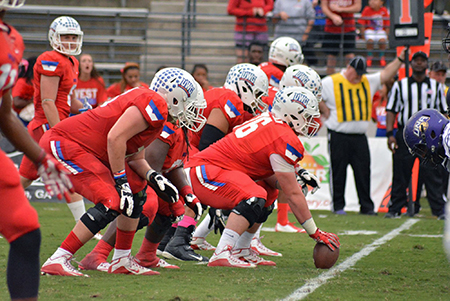 Hall’s first regular season attempt at beating the Blazers as Wolves coach came in week 6 of the 2014-15 schedule. Hall and the Wolves failed to get into the end zone, losing 40-6 in Valdosta. Although the team was undefeated leading up to a loss at Valdosta, their momentum was stifled.

The next week Hall and the Wolves would have redemption in another conference match-up against ranked opponent, the Delta State University (DSU) Statesmen. The Wolves bounced back with a huge win, 24-16. The team not only jumped back on track, but possibly saved their chances at playing in the post-season, falling from No. 21 out of the rankings completely.

The week after their win over the Statesmen, the team went on the road to Florence, Ala., and played another conference opponent, University of North Alabama (UNA) Lions. The Wolves struggled against the Lions, in a game played without the program’s seasoned quarterback, Dallas Dickey. Eventually, the Wolves would lose by a small margin, 31-28. 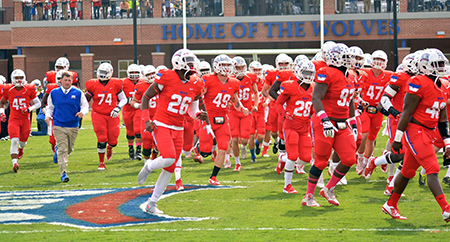 The Wolves would then win the final three games of the regular season, and in the process allowed their campaign towards a championship to remain alive. The team won twice more defeating the Tuskegee University Golden Tigers and Delta State. The two wins gave them the opportunity to travel back to Valdosta to claim conference supremacy. The Wolves went on to win, and claim their first ever NCAA division II semi-finals appearance. Their opponent in the semi-finals, the Colorado State University-Pueblo (CSU) Thunder Wolves, went on to win the match-up by a razor thin margin, 10-7.

Since their meeting with Colorado State, the Wolves have won eight-straight, including another win over the Blazers and most recently, the UNA Lions. The Wolves have taken sole possession of the best record in conference play amongst the Gulf South Conference teams. 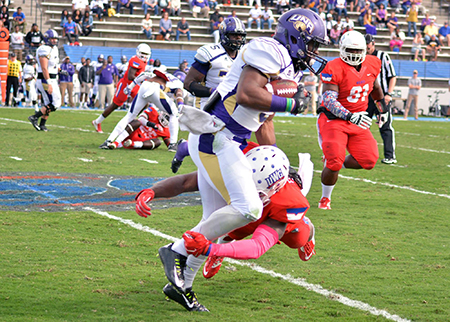 At 8-0 they sit atop, ranking No. 1 in the most prestigious ranking services for NCAA division II football; AFCA, D2Football.com and Super Region 2 rankings. And after their win over the Lions, Coach Hall has led the Wolves to victories over every conference opponent just over a year after joining the University’s program. The team now seems primed to finish a year long journey towards an NCAA division II National Championship.

This, the 2015 season, is the best football season the University of West Georgia has been able to enjoy in recent memory. It is undoubtedly the Wolves’ best football season since 2000, and fans should also note they are possibly witnessing the University’s best athletic squad ever. However, there are still three more conference opponents remaining on the Wolves’ regular season schedule, and even more games to be played in the post-season, anything can happen

*All photos in this article are courtesy of UWG Athletics