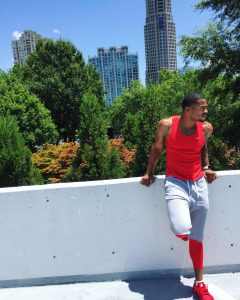 UWG graduate and former Wolves’ basketball forward Emory Bernard is making his way to the big screen. The West Georgia alum made his acting debut August 22 in Tyler Perry’s TLC drama series “Too Close to Home”. With the show pulling in over 77,000 viewers, many people all over the country witnessed the West Georgia graduate take his first steps into acting.

Two months prior to hearing about the role Bernard signed with a modeling agency and had done a few modeling gigs. This was Bernard’s first acting job and he says he went off script while auditioning. “I found out about the role two days before the audition and going off script was spur of the moment,” says Bernard. The UWG alum says he needed to do something that would set him apart from the other actors.

Because Bernard had so little time to prepare for the role and had a client the day of the audition he thought it was best to not pursue. “My client cancelled that day, which gave me the opportunity to go for it,” says Bernard, “It was my first time acting so I wanted to go for the experience.” Bernard only had thirty minutes to learn his lines and walked in a room of 70, all auditioning for the role of the bartender. He received a few tips from a woman who was once an actual bartender. “She told me to make sure I was always doing something with my hands and to keep a towel over my shoulder,” says Bernard.

Bernard currently works as a certified personal trainer in Atlanta with over 35 clients. He enjoys not depending on one job. “I don’t like putting all my eggs in one basket,” says Bernard. “It’s always good to have something on the side.” While many would think twice about not having a stable job position, Bernard thrives. Bernard says that he always trys new things, which is why his family was not surprised about his role in the TV series. “My mom wasn’t really shocked when I told her I would be on television; she’s known me to always try random things.” says Bernard.

Bernard says that seeing himself on television was more funny than anything. He did not grasp the concept of him being on national television until it actually happened. “As I was watching, people were calling me and messaging me telling me that they’re watching the show,” says Bernard. He says that he even had a random person tell him he looked familiar, then recognize him from the series premier.

Although he saw this acting opportunity as a great experience, Bernard does not intend on making a career out of acting. He enjoys helping people reach their fitness goals as a personal trainer but would not shy away from becoming a household name if it were in the cards for him. “I just go where the wind takes me,” says Bernard.