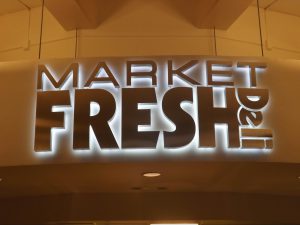 Within the last few years, UWG has undergone some changes and restructuring. For instance, the Oaks, a freshmen housing dorm and the East Commons, an on-campus dining hall, were built in 2013. Bike lanes were added to the campus in 2015, and now the food services have been changed from Aramark to Dine West.

With the new food services came some changes to on-campus dining. This year, students were unaware they would come back to the university without Subway. In Subway’s place is Market Fresh Deli. The university decided to remove Subway from the dining services. John Lyons, who is the Director of Campus Dining, oversaw these new dining changes.

Lyons sees Dine West as more practical because it better fits students, and it saves UWG money by cutting out Aramark.

Lyons commends Dine West on its hospitality and amazing service. The major change was more so about the interaction between the dining staff and students.  Dine West trains their employees differently than Aramark to ensure the customer’s experience is one to re-live. According to Lyons, Aramark was a dining service with a corporate profit motive.

“Profit is not a dirty word, but that’s what they’re in business for,” said Lyons.

Lyons says Dine West is not perfect, but he is pleased with where they are. Although Lyons’ intention of switching dining service providers seemed more cost effective, many students at the university are not satisfied with the removal of Subway.

“I’ve never had the deli market,” a Dine West employee said. “I heard it wasn’t as good as Subway.”

She also said she never tried the deli.

“The deli is not an established brand,” she said. “It’s new to everybody, and I don’t want to waste my money. I knew with Subway what they had to offer.”

Mia Hutchins, a junior and mass comm. major at UWG, commutes from off campus housing. She does not agree with the new dining service changes.

“I don’t necessarily agree with the changes because they changed things that we didn’t ask to be changed,” said Hutchins. “Everybody liked Subway, so they could have kept that and got rid of something else.”

However, Hutchins acknowledged that she likes Market Fresh Deli because it seems healthier and offers other options as sides. Dine West was said to be a change to better suit students, but Subway regular, Jasmine Reed, a junior and nursing major at UWG, does not see Market Fresh Deli as a proper replacement. Reed feels that the decision was made without students in mind.

“They made the decision on their own and I’m sure many classmates are upset about it,” said Reed.

Lyons stated that Dine West has only been operating for five weeks so the success rate is not yet evident.