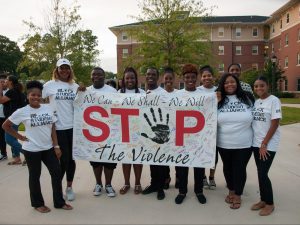 On Monday, Aug. 22, the Black Student Alliance (BSA) collaborated with the National Pan-Hellenic Council (NPHC) and Housing and Residence Life to hold the  “Black Lives Matter: Stop The Violence” vigil at the Oaks Amphitheatre. Its purpose was to remember African-American lives lost to police brutality and gun violence. Over thirty students showed their respects.

“The motivation behind the vigil was to raise awareness on campus about what is happening out there in our society,” said BSA’s Public Relations Chair Keniesha Wilborn.

Students acknowledged Philando Castile and Alton Sterling, both recent victims of police brutality. Castile, age 32, was shot and killed in front of his daughter and girlfriend by a St. Anthony Minnesota Police Officer after being pulled over as part of a traffic stop. Sterling, age 37, was shot several times while held down on the ground by two Baton Rouge Police Officers. Not only did students acknowledge them, but they also paid tribute to 19-year-old Bryce McCallum, a UWG student. McCallum was shot and killed by his stepfather this summer on July 24. He would have been a sophomore this school year. McCallum’s former Resident Assistant, Matthew Echols,  and other friends re-lived happy memories and talked fondly of him.

At the vigil, BSA, NPHC and Housing and Residence Life provided information to students about their civil rights and what they can do if any of them come in contact with law enforcement. Keeping both hands on the steering wheel at all times, already having their license and registration in hand, being respectful and having the right to keep their window rolled half-way down were some of the tips.

BSA aims at providing a positive voice for students on campus and to be an example to the student body and other organizations who feel like they cannot make a difference. The “Stop The Violence” event was just a vital stepping stone for many more positive events to come later on this academic year.

Janaya Khan, who founded the Toronto chapter of Black Lives Matter, will be speaking on Sep. 21 at 7:00pm in the Campus Center Ballroom. BSA is hosting the event with SAC.