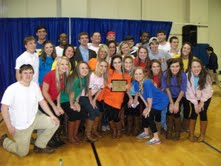 A Disney themed night for the Greeks at UWG provided an entertaining show for students. The Greek Variety Show was held Wednesday Feb. 12 as all fraternities and sororities on campus competed for a chance to win the title of 2013 Variety Show champions.

Kappa Delta Sorority and Kappa Sigma Fraternity started off the night with an exciting show. The other fraternities and sororities performed in random order after that. All of the participants put in hard work to make their performance worthy of first place. At the end of the performances, the judges scores were in and third through first places were announced. In first place were Phi Mu Sorority, Sigma Chi Fraternity, and Delta Chi Fraternity. Door prizes were also given out to the first place winners.

The participants of Phi Mu, Sigma Chi and Delta Chi all worked hard at practices two weeks before the Variety Show. Students sacrificed many hours and many school activities to participate in the show.  “It was hard to juggle classes, school work and practice, but when we won, all of our hard work was worth it,” said Dalton Daniel of Sigma Chi Fraternity.

When the day of the Variety Show finally arrived, Sigma Chi contestants were nervous, excited, anxious and ready to win. When competitors walked in with props and costumes, everyone in the gym knew it was going to be an entertaining night.  Sigma Chi was fourth in the lineup and after seeing the performances ahead of them, they knew it was going to be a tough competition to win. It was now their time to showcase what they had been working on for so long and hearts were pounding backstage. The performance was outstanding and executed perfectly. After their performance, they were filled with relief and excitement.

The rest of the fraternities and sororities then had their turns to take the stage. Again, the groups were near perfect. Daniel said this made Sigma Chi feel even more nervous for the results. After all of the Greeks had performed, they announced a raffle and distributed door prizes. The tension in the room and the anxiousness of all of the participants was immeasurable. After third and second place were announced, Daniel said they knew they were either first or had not placed this year.

Then the judges called Phi Mu, Sigma Chi and Delta Chi for first place. All the members jumped up with excitement and cheers. “The best feeling is that we pulled together, performed a great show and also made new friends. Winning was the cherry on top of it all,” said Hillary Martin of Phi Mu Sorority.  Winning the 2013 Greek Variety Show was the payoff for everything that these participants had worked so hard for.