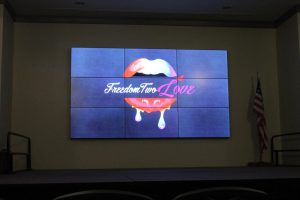 According to the Human Rights Campaign, out of most undergraduates, 85 percent describe themselves as heterosexual, 6 percent identify as homosexual or bisexual and about 2 percent answer as other or don’t know/no answer. Out of that small percentage, those same Lesbian, Gay, Bi-sexual, Transgender, Queer (LGBTQ) students feel like college is not a safe or welcoming environment to live, learn and grow, according to campuspride.org. This website is dedicated to ensuring the safety and livelihoods of LGBTQ students at universities and colleges. Meanwhile, the Human Rights Campaign is a global organization that is committed to the rights and sanctions of everyone in the LGBTQ community. These issues and more are what FreedomTwoLove (F2L) founder Rena Ingram discussed on Wednesday, Sept. 14, in the Campus Center Ballroom.

“I want people to take away a better understanding of their ability to be a difference,” Ingram said. “Each and every person can be an essential piece to that bridge we’re building together, but it must be done by one’s willingness to engage in the conversations revolving around the LGBTQ community that many people shy away from.”

As described in their mission statement, “FreedomTwoLove is a brand that aims to fight against the injustices targeted on the LGBTQ community while encouraging those within the community to build resilient confidence and comfort in their own sexual orientation identities.” To “bridge the gap” between the LGBTQ community and their heterosexual counterparts, Ingram created a safe space through an engaged discussion.

Ingram’s love for the LGBTQ community stems from a pure place of support.

Spreading that same support over UWG, Ingram helped students come to terms with hard subjects like exclusion, safe LGBTQ terminology and “coming out.” The program, titled “Let’s Be Real: #DontLieToMe2016,” began with a brief introduction of herself and why F2L was started. She later made sure the audience was comfortable by creating a transparent atmosphere. A short presentation followed that guided them on how to obtain and maintain self-love.  There was an open forum that allowed attendees to ask Ingram or each other about anything LGBTQ related.  Questions regarding how to properly come out, her take on religion and sexuality and proper labels were challenged. Individual were able to relate to the opposite sexuality and left a little more aware of each other’s feelings and needs.

Fort Valley State University, where Ingram completed her bachelor’s degree, is where her devotion first began. Her first event was titled “Addressing the Misconceptions of the LGBTQ Community” and she stood up for gay rights. Still wanting to continue the fight for her community in her own way, F2L was born. However, her work did not stop there.

Besides displaying F2L’s events and their mission, freedomtwolove.com is also a platform for her blog. Every second of the month, a new post is published; whether it is sifting through the messages of black masculinity or giving a voice to the victims from the Orlando shooting, she shares her views to educate and shine a light on the LGBTQ community.

With a stirring passion to make a difference and create a louder voice for her community, Ingram works hard to spread love, diminish hate and educate students, supporters and inquiring minds. In lieu of this event, a photoshoot, curated by Vice President of the Black Student Alliance (BSA) Tia Tuggle, was held in the Campus Center earlier this summer. It began the bridging process with different student leaders across campus and for promotion. Similar to the setup of the national organization #NOH8, participants wore duct tape on various parts of their bodies advertising F2L.

With gratitude for BSA finding the passion in their hearts to bring Ingram and F2L to UWG, Ingram was granted her wish. She wanted more diversity in her outreach events. However, the journey does not stop here. The road to wider diversity and inclusion in every aspect is long, but F2L and Ingram are very open and willing to take on that journey for quality. 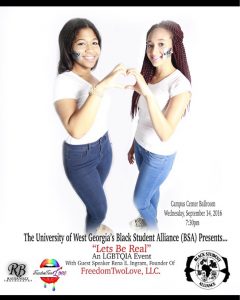