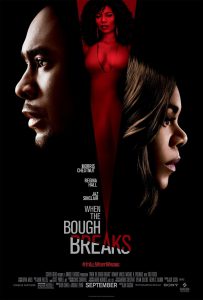 When the Bough Breaks, a thriller starring Regina Hall, Morris Chestnut and newcomer Jaz Sinclair, tells the story about a married couple wanting to have a baby. Laura Taylor (Hall) is unable to carry a child, and with three previous miscarriages, her and her husband John (Chestnut) search for a surrogate mother to carry their baby for them. In comes Anna “Walsh” (Sinclair). She is the perfect fit and wants to be a surrogate for the Taylors. Of course, her innocent and shy persona is not what it seems.

Sinclair plays Anna quite well. Her timid smile, kind voice and expressive eyes all lend itself to happy Anna, the one who is sweet and pretends to not know she oversteps her boundaries. The writers created a manipulative, desperate and crazed character in Anna.  Innocence suits her, and she uses it to her advantage. Her goal: John. She wants him and attempts to seduce him numerous times. She goes as far as to send sexy videos of herself to his work email account.

Sinclair gets all the credit for her performance later in the film, too. Once John’s rejection hits, Sinclair goes from happy Anna to unhappy Anna. And is she unhappy. She kills the pet cat, Miss Havisham, throws a chair into a glass table and threatens to keep the baby. The audience knows she has snapped when she cuts herself with John’s razor in her bathtub. She also sings “Rock-A-Bye Baby” as she does so. If that was not proof of the bough breaking, then nothing else was. That scene was most significant, a great contrast from happy Anna.

In previous scenes, she was in that same bathtub, content, reading a book, quoting a motivational phrase about her being in control and happy. Now, she has had enough; unhappy Anna is unleashed. Viewers can easily guess what happens after that.

The foreshadowing left several clues. The mention of the lake house, the teddy bear Laura receives at her baby shower, the scenes with Miss Havisham and the murdering of Anna’s abusive ex-boyfriend, Mike Mitchell (Theo Rossi) all work to heighten the story. The viewer may not know exactly how the lake house, the bear and Miss Havisham will play out in the story. However, after Anna kills Mike because of how he treated her, they automatically know Anna will attempt to kill Laura and/or John. From this scene, they also know Anna’s true character.

Not only does Sinclair deliver, but Hall and Chestnut perform well, too. A sympathetic audience would want them to succeed and be happy in the end with their new baby. Hall has pull-of-the-heartstring moments, particularly when she hears the news of possibly having a surrogate, when she misses the first ultrasound appointment due to work and when finds out Anna destroyed her baby room as an at of revenge for being with John.

All of her emotions are the forefront, which work to really get the audience attuned with what she feels scene by scene.

Chestnut snags the audience with his heroic and helpful character. For one, when Anna’s boyfriend beats her, she calls John, who tells her she has another place to stay when she says she does not. He is also sensitive and understanding toward Laura when she tells him she is not ready for intimacy yet after the miscarriages she’s endured. The audience starts to fall for John after that. They see what Laura and Anna see in him: compassion and gentleness.

Laura and John have their downfalls, however. His was his secretive behavior in not telling Laura about Anna’s inappropriate behavior toward him. He wanted to endure for his wife’s sake. He thought he could handle it. Laura’s downfall was her hope and eagerness; she was excited about Anna, even invited her to dinner and went to the diner where she worked to meet her. These traits got them into trouble.

As for the ending, it could have been better. After John takes the baby from Anna’s bed and after a brutal fight between the two, he stands in the window, listening to police sirens. Then he turns to Laura and tells her it will be okay. All the while, Laura sits on the couch holding the baby Anna was supposed to birth for them. Then the credits come. The viewer wonders what will be okay. Is it the baby? Is it their future? We do not know.

Though the viewer already knows the story, especially if they watched the trailer, it is still a good film to watch for entertainment or just to support black actresses and actors in Hollywood.