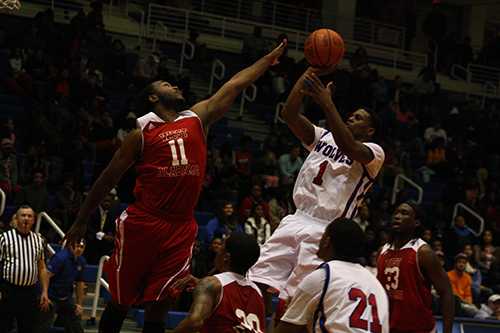 The National Collegiate Athletic Association compiles a statistic known as the Academic Success Rate. The ASR tracks the percentage of student-athletes who receive a college degree at any Division II school, such as the University of West Georgia. The most recent ASR, issued in a report by the NCAA in November, 2013, shows that 71 percent of all Division II student-athletes who started college between 2003 and 2006 graduated in a six-year span.

But for one of the emerging stars on the Men’s Basketball team at UWG this season, it took six years after entering college for him to become a student-athlete in the first place.

Deonta Stocks first enrolled at Daytona State College in Daytona Beach, Florida, in August, 2007. But a series of academic dominoes prevented him from playing basketball at DSC. Stocks, who was named Georgia High School Association Class 5A Honorable Mention All-State during his senior year at Lithonia High School (2006-07), didn’t suit up for his first college game until December, 2013, after he had enrolled at UWG. In an interview in January, 2014, the 25-year-old discusses his journey throughout the last seven years.

Stocks spent his first semester at DSC completing the requirements for his General Educational Development certificate.

“What happened was I was coming back home, maybe like twice a month, to take the science part of the graduation test, and missed it by one or two points,” says Stocks. “And so I took it the last time, and I missed it by one point. I had to come back home. So then when I went back, I came back and got my GED.”

But after he passed his GED Tests, academic requirements kept Stocks from playing at DSC going forward.

“I went back the second semester and I failed, like, two classes, I think,” says Stocks. “I failed, like, a math class. And then I attempted to make it up, and the credits got messed up somehow, and I came up a little short. So I ended up losing the scholarship.”

Stocks left DSC in August 2008. He attended Trinity Valley Community College in Texas in January 2009, but left in May of that year. Following his departure from TVCC, Stocks spent most of the next three years working, keeping himself in shape, and playing in summer leagues.

During that three-year span, Stocks also welcomed a child into the world.

Stocks returned to DSC in August 2012 for another chance at college basketball. But upon his return, he had to start over again as an academic freshman.

“They have a clause,” says Stocks. “I forgot the name of it. But what happens is if you’re out of school for over two years, then, basically, nothing counts. The credits you have, they count. But everything else was like a clean slate. So I went down there as a freshman on the court. But, somehow, the commissioner of the conference, I was told, didn’t let me play. And then it was the athletic director who wanted to see me pass my classes.

“I was cleared. I was already eligible and cleared. But it was something within the school, something they do, I guess. He just basically wanted me to prove that I can pass my classes all year, and then I was gonna play the following year. But I ended up getting the call from Coach Cooney.”

After leaving DSC in May 2013, Stocks almost went to Valdosta State University instead. But after an apparent lack of interest from VSU, and a phone call from UWG Men’s Basketball Head Coach Michael Cooney, Stocks changed his mind.

“When I was talking with Valdosta, they didn’t have any sense of urgency,” says Stocks. “And I got a call from coach Cooney. And three days later, he sent me an email with a scheduled official visit. And so what happened was I let the Valdosta coach know that I have this visit here. And I came up here and loved it. It was closer to home, to my daughter, closer to my family.”

Following the Fall Semester 2013, his first as a student at UWG, Stocks played in his first college basketball game on December 14, when the Wolves traveled to Rome, Georgia, to play against the Shorter University Hawks. He played for 37 minutes in the game and scored 20 points, including the game-winning shot in the final seconds to give UWG a one-point win, 82-81.

“I went into the game trying my hardest just to help my team, not change the code, not mess up the chemistry, because they were actually on a winning streak. And so I just wanted to blend in. But my natural instinct just kicked in toward the end, and it just felt good. Everything I was doing just felt good. I just wanted to come out, play hard, and blend in with my team. So I feel like I had a huge impact on the game.”

Although Stocks did not play at DSC, he lists Tony Andre, the school’s Men’s Basketball Head Coach while he was there, as one of three individuals in his life, (the other two being his parents), who supported him to get to this stage at UWG.

“I mean, all three of them, they never stopped believing in me,” says Stocks. “They always knew that I could do it, and they didn’t let me give up.”

Stocks says that while he hopes to play professionally in the NBA in the future, he also understands the importance of receiving his college education.

“But, of course, the reality, you know, get my education first. And then if basketball takes me further, if the opportunity comes, then I’ll take it.”