Some of us remember walking through the library in middle school and stumbling upon a book by the name of Scary Stories to Tell in the Dark by Alvin Schwartz. We told our friends about the stories at campfires or sleepovers as if they were real. This book is a part of a three part series by Schwartz and was recently made into a PG-13 mystery/thriller. André Øvredal’s Scary Stories to Tell in the Dark was released on Aug. 9, 2019 and it is giving this classic book series and new, grotesque feel to it. This film allows a new generation to experience the suspenseful terror that we felt when we were younger. Øvredal just helped to make our fears ever more horrendous this time.

The movie focuses on the horror stories of a young girl named Sarah Bellows. This book of stories is then discovered by Stella Nicholls and her friends alongside a new friend of Stella’s named Ramón Morales. The book starts to appear in odd places after Stella takes it home and she soon discovers that Sarah is to blame. Stella and her friends slowly find that Sarah Bellows was not the type of person everyone expected her to be and is still alive, in spirit at least. However, the movie is more about Stella and her friend’s journey through discovering what actually happened to Sarah Bellows.

In Scary Stories to Tell in the Dark, there is an urban legend in their town that tells of Bellows fate as a child after her parents discovered her albinism. They locked Sarah away in their basement alone with only her book of horrors to keep her company and the children she told her scary stories to through the walls of her prison. Now, over one hundred years after her terrible fate, she’s still writing stories to terrorize those who uncovered her book. Only this time, her stories become real horrors that haunt Stella Nicholls and her friends.

After taking Sarah’s book on Halloween night, Stella realizes that she made a terrible mistake by hanging around the Bellows supposedly haunted house and taking Bellows book. Sarah Bellows began writing more horror stories from beyond the grave to punish Stella for taking her book and her friends for intruding in the house she once lived in. They angered Sarah and now she wants her revenge. She then creates Stella and her friends worst fears so she can try to pick them off one by one.

Although, she decides to start picking off the rest of the town while she’s at it. Sarah Bellows writes the stories from Schwartz’s books called: “The Big Toe”, “Me Tie Dough-ty Walker!”, “The Red Spot”, “The Haunted House”,  “The Dream”, and “Harold”. Each of these stories attempt to kill people in the town and complete Sarah’s intentions of getting her book back. Even though Stella is one of the last ones to be written about, Sarah tries to make her suffer by hurting her friends and other members of the town. Stella then makes that her mission in the whole film to give Sarah Bellows her book back and figure out why she continues to make her stories come to life in order to kill anyone who finds her book.

Since the story is placed somewhere in the WWII era, the movie spells out some of the stereotypes affecting many people at this time by making Ramón Morales be picked on for being hispanic and Sarah Bellows a person that had albinism. In one scene “wet back” is spelled out on Ramón’s car by bullies to get under his skin for helping Stella and her friends. In another scene, Bellow’s parents are shown shunning her for being different and hiding her from others. 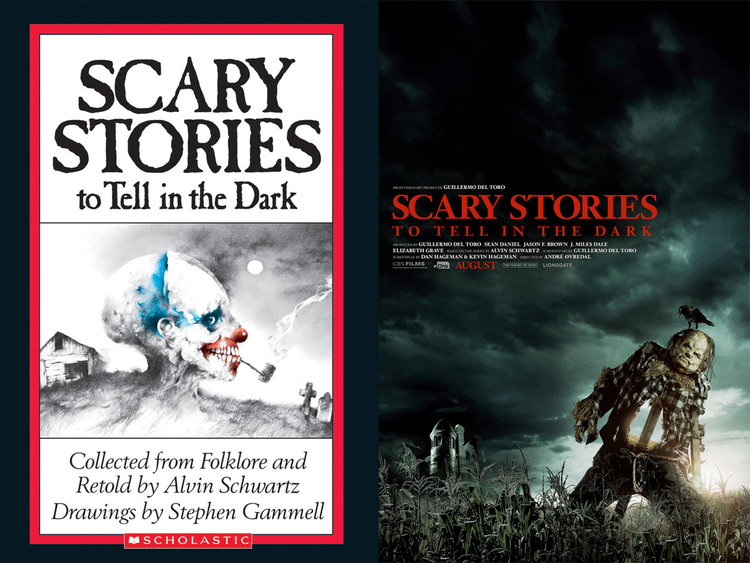 Overall, the movie brilliantly captured everyday fears that we all have and created some grotesque monsters that will surely haunt some teenager’s nightmares. The costumes and animations were definitely imaginative and otherworldly. This works perfectly for the overarching scary vibe he tries to give the audience. Øvredal did make these stories come alive in their own way in this film by letting us see just how scary these stories could be. He took the terrible images left in our minds from reading the horror stories in Schwartz’s first book and made them much, much worse.