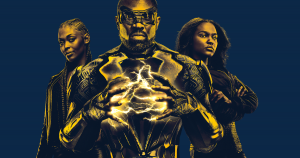 It is almost impossible in this day in age to avoid shows or movies from the superhero genre. With shows like Daredevil, Luke Cage, The Flash, and Arrow becoming so popular, there is a reason why there seems to be a premiere for a superhero show or movie every month. One new superhero show that breaks the mold of the genre is Black Lightning. Black Lightning premiered on The CW on Jan.16 and tackles sensitive subjects and gained electrifying reviews.

Black Lightning is unlike the rest of its neighboring superhero shows on The CW. The show strays away from the other shows because it does not focus on a superhero and the origin of his powers, it focuses on a man and his family. The lead role of Jefferson Pierce is played by Cress Williams. Pierce is a middle-aged high school principal who hung up his superhero tights and his electric based powers in order to preserve his family. In the pilot episode, Pierce is forced to wear the superhero tights once again when his two daughters, Anissa and Jennifer, are kidnapped by a member of the city’s gang, the 100.

Black Lightning deals with many relevant and complex subjects that African-Americans face in the real world. Some of these include gang violence, police brutality and racism. One of the most shocking scenes in the pilot episode is when Pierce was pulled over by cops. He was forcefully yanked from his car and cuffed while guns were being pointed towards his face. All of this had happened because there had been a crime committed nearby and the only description of the criminal was “black male” The show has shown that it is not afraid to tackle these sensitive subjects and did so accurately.

Black Lightning also does not shy away from diversity with Pierce’s daughter, Anissa. Anissa, who is played by Nafessa Williams, is an open lesbian who is also an activist that participates in protests. She has also shown signs that she has superpowers and wants to actively pursue the vigilante lifestyle unlike her father.

The pilot episode premiered on Jan. 16 and it received 2.3 million viewers. Black Lightning  has gained positive reviews from television show critics. Black Lightning’s pilot episode is the highest rated original series premiere episode in two years. The show is on par with the premiere of Riverdale which is one of The CW’s most popular series, gaining the same number of viewers. The show also almost gained as many viewers as the most popular show on the network, The Flash, which gained 2.5 million views.

Critics agree that the main reason why they are so captivated by the show is the Pierce family dynamics. The show balances its superhero antics and heavy subject matter with a family centered story and humor, which comes from banter within the family. Without the inclusion of superpowers, the show is about a boring man trying to fix things with his ex-wife and provide a stable life for his family. Black Lightning brings a new perspective to the heavily oversaturated superhero drama and raises the bar for the genre.