With the 21st century came the rise of comic book movies, which means that more superheroes, and their evil opponents, are making their way onto the big screen.

There are literally thousands of comic book characters, but only a handful of them have managed to make the jump to the big screen successfully. This trend has also given rise to the rivalry between fans of the Marvel Comic Universe and the DC Comics Universe, the giants of the industry.

Both companies have their own iconic characters that stand out amongst the rest. Marvel has Captain America, Iron Man and Spider-Man to name a few, while DC’s Superman, Batman, and Robin are arguably three of the most popular characters in superhero fiction. But as more and more of these characters are starting to show up on the big screen, it has become evident that some of them are embarrassingly similar, either in costume, powers or even origin stories. 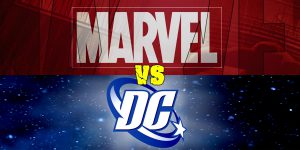 Other similar characters are DC’s Batman and Marvel’s Iron Man; both without superpowers but use their brains, wealth and technology to make up for it. There’s also DC’s Flash and Marvel’s Quicksilver, both with the power of speed, and Marvel’s Hawkeye and DC’s Green Arrow, both very skilled archers. But with these apparent similarities in their characters, Marvel seems to lead the trend, even though DC Comics was created first.

Studies show that DC movies are lagging behind Marvel in both ratings and earnings. According to the Internet Movie Database (IMDb), the highest grossing DC movie, Christian Bale’s “The Dark Knight” released in 2008, made only a little over $530 million. Meanwhile, Marvel’s highest grossing film, 2012’s “The Avengers”, made over $620 million at the box office.

So what makes the Marvel Universe so successful, even though it was created almost five years after DC Comics? In past interviews, Stan Lee, former editor-in-chief and current chairman emeritus of Marvel Comics states that he believes it’s because they don’t really try hard enough.

Lee even admitted to obsessively trolling DC back in the day, when Marvel started outselling them in comics. This trolling continued when the Marvel movies began surpassing DC’s.

“DC could probably make a lot more money with Superman and Batman if they announced that I’d have a cameo in it,” said Lee. “People wouldn’t believe it – they’d have to go to the theatre to see it!”

Reports show that Marvel’s highest grossing movies are the ones that usually involve more than one of the most famous characters, such as Captain America: Civil War. With the release of the highly anticipated Justice League this week, both critics and DC fans alike can only hope the movie matches or exceeds Marvel’s success.