Yosemite in Black started off as a hardcore band that originated in Douglasville, GA. With many shows under their belt, the group decided to switch up their style of music by changing their sound from hardcore to more of a metal band. To cope with this new direction, they have chosen Luke Marlowe as the new vocalist.

Marlowe has now risen from a part-time drummer in the band to a full-time vocalist. Following the shakeup of singers, the band decided to release a new song to show their fans what the new material would sound like. Their original song “Bloodshed” was released to the public on Aug. 16, 2019, on Spotify and Apple Music. This is a fresh sound for the young up and coming band whose ultimate goal is to tour the world in the future. 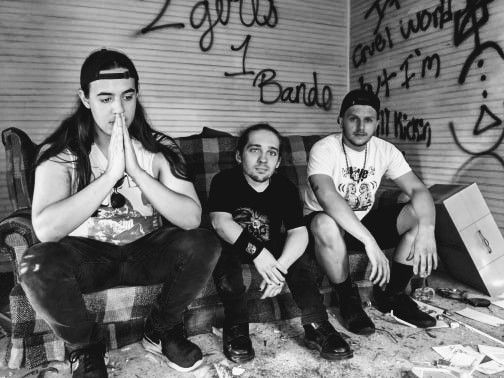 Alongside Marlowe, the band also includes Bassist Cody Jenkins and Guitarist Dylan Beard. Currently, they do not have a full-time drummer but with the recent success of the band, the open spot should be filled quickly. As well as being the lead singer, Marlowe is also the band’s sound engineer and current drummer for recording purposes.

Abigale Martin also plays a prominent role in the band. As Manager for the band, she oversees all the behind the scenes information such as social media posts, booking show dates, and being the group’s photographer.

In an attempt to release songs under their new sound, Yosemite in Black has decided to focus solely on recording as many songs as possible in preparation for their EP. The expected release date will be sometime this Winter. Once the EP is complete, the band will begin to tour in order to gain a more prominent exposure and larger fanbase.

“We’ve really come a long way since we started out,” said Cody Jenkins. We’ve matured a lot, especially when it comes to production quality.”

The song “Bloodshed” ushers in a new era for the band and is just a glimpse of what to expect from the group in the imminent future. The band plans on releasing another song in the coming months.

“I was very anxious on the way to record the song for the first time, but as soon as we finished I knew it was our best song we’ve released yet, it was us just throwing something at a wall, and it stuck so we’re all really excited for our upcoming EP,” said Jenkins.

Lasting a total of three minutes and 30 seconds the song features a mix of both clean and rough vocals with an interesting twist as it features a bass guitar solo by Jenkins. By implementing a bass solo, Yosemite in Black hopes to shake up the typical songwriting formula. The group hopes to attract new fans to their music by trying a wide variety of unique sounds that make them stand out from other bands.

Yosemite in Black’s main outlet for social media is on Instagram however, they also utilize their Facebook page where you can find their song releases on eventual show dates. The future of this band is very promising with their transition into a new metal sound.