At twenty-eight years old, and just recently married, Liz Warner is in a time of transition. One that involves settling and slowing life down, but this is not something she wants.

Liz has always had the desire to step out of her comfort zone and try new things. It’s who she is. She is an Atlanta native that moved across the country for school. After she was comfortable there she moved to Japan. Once she got comfortable in Japan she moved to France to get her masters. Now, after two years in France, she is ready for the next big step in her life. Liz wants to continue to travel, continue to meet new exciting people and most importantly, change the world.

Liz loves to run and travel and she is determined to make an impact on the world by combining the two of them. To make her impact on the world she started an international fundraising effort, Run to Reach. Her goal is to use Run to Reach as a tool to use the power of running to inspire and evoke change in the seven continents that Liz will be running in.  On her run, Liz will be using Run to Reach as a platform to connect runners around the world and raise money for 20 different charities spread out through the seven continents.

“The idea was born in my head at a time of transition,” said Liz. “I was finishing school and wasn’t really enjoying the job I had here in Paris, and I also had just gotten married. There were all of these changes and I guess the overriding feeling was setting a new intention of not settling down but of hoping to live outside of my personal bubble, which I have always pushed myself to do.” 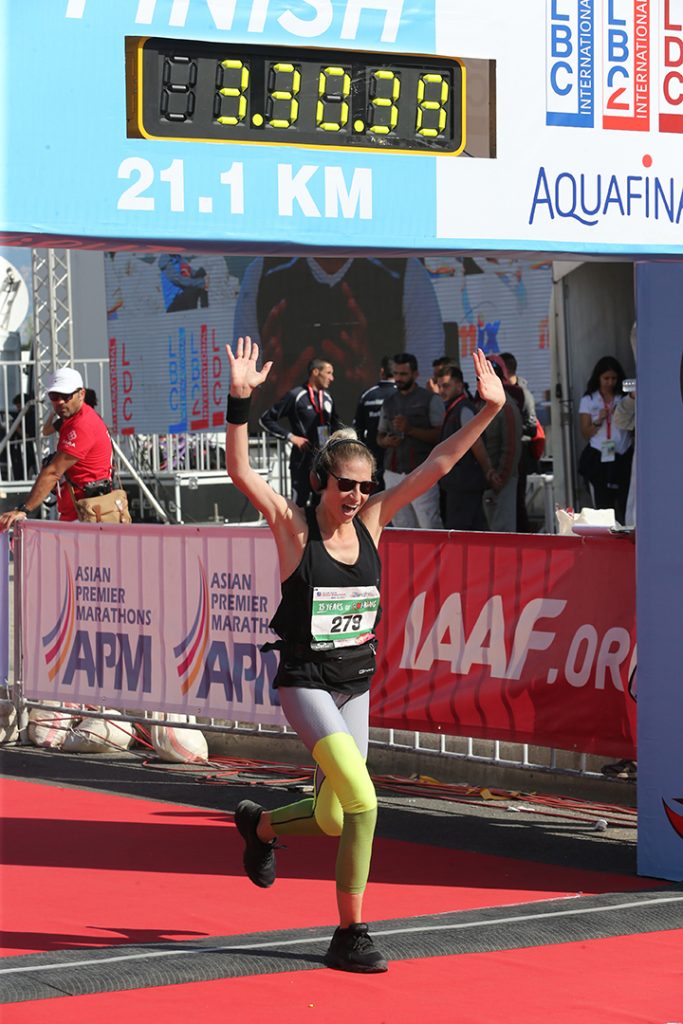 Liz is continuing to push herself physically and mentally with Run to Reach. Her goal is to run 30 marathons in 30 countries by the age of 30. This may sound like a daunting task to the average person, but Liz sees it as a way to make a difference in the world.

“I knew that the only way I could personally achieve all of this was if I could somehow insert my two passions in life into this equation,” said Liz. “Running marathons and traveling the world.”

Liz has not always been a runner and never imagined that at the age of 28 that she would be striving for 30 marathons. In fact, her love of running was not discovered until she ran her first marathon in Japan. It was then that she developed a craving for the meditating effects that it had on her.

Preparing herself for the extreme amount of running and traveling that Liz is about to endure seems like a tough enough challenge, but Liz is more concerned about the mental wear and tear she will be going through. Running long distances can be mentally draining for Liz and on top of that, she will be dealing with all of the administrative sides of Run to Reach.

“For me, it is almost more about mental endurance than physical and just making sure I am focused when I am running,” said Liz. “I did two marathons back to back and physically it was fine but mentally it was kinda tough. After a certain point, you train your mind to forget that you’re even running so I think that when you get to that point of training you have reached this kind of flow. That is when I feel very confident.

“The administrative aspect of this project is actually very time consuming so I am not even spending as much time on training as I would like,” continued Liz. “I try to log in at least 60 miles a week in runs.”

This journey is one that takes a lot of time, energy and support, but one Liz is passionate about. This next year and a half she will be dedicating her life towards her mission. She has a GoFundMe page to support her through her travels, this will allow her to run and connect with other full time. She also has a different site for Run to Reach in order for her to raise the money that she is donating to the charities. She decided to keep the two pages separated so those involved knew that their money was going to the right cause.

After Liz runs the 30 marathons she will continue working with Run to Reach in hopes that it will become a community for all who love running. This will provide her with the platform to make the long-lasting impact she is striving for.

“I am not sure as to where this will go, but I am open to anything that will come along the way,” said Liz. “ Now I think my immediate long term vision would be to have Run to Reach to become a community platform that would allow global runners to just connect with each other and unite through this shared interest of giving back and connecting locally with these places.”