The UWG debate team hosted a social protest debate on April 12, 2018 in the Campus Center. During the event, they debated about controversial topics that have affected America for over a century. The content of these topics led  to an intense environment and good arguments to support their claims. 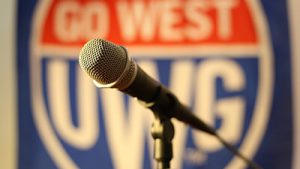 The resolutions were “Social media is a net positive for social movements”, “Economic boycotts are a productive NAACP tactic,” and “Police abolition should be prioritized over forming police practices.” For both sides of the debate, there was an offense and defense and time for cross-examination in between.

With the first resolution, the two sides developed very good arguments. On the offensive, the team talked about the large amount of people on Twitter who are of African descent. They come together as “Black Twitter” and that it is a good thing because it allows people of the same background to network remotely and discuss struggles of minorities.

They mentioned that it allows users to have a voice and become more involved. It was made a necessity for social media now versus in history because of the exposure to events going on around the world.

The counter-argument talked about how social media influences the violence of hate organizations, weakens the movement, and allows fake news to be effective. The defense mentioned that hate groups can network through social media.

With a voice, they can recruit and carry out hate that could result in violence. They said that social media also increases “Slactivism,” which is when someone likes or retweets a post but does not actually act.

With economic boycotts being a productive NAACP tactic, they feel that it is more acceptable to take a stand for equality by affecting companies economically. The purpose, the team claimed, is not to run companies into the ground but to show them that they are not agreeing with their motives. It is also great for seeing minorities act together to make a statement.

The defense argued that Rosa Parks was not famous for boycotting the bus, but she was famous for taking a stand. They claimed boycotting does not have an impact on sales revenue. Instead, people are pushed to make change when tragic events occur. Meaning that people do not get motivated to change society unless adversity affects the country.

With the final debate, the offensive argued that police officers do not do their jobs effectively and therefore need to be abolished. They claimed that cops do not prevent crimes, yet only patrol and escalate crime. They brought up the Philando Castille and Alton Sterling case to support their claims of African Americans who are killed by the police. According to the offense, black people are in fear of their life when it comes to the police and putting a gun in the hands of a racist is not the answer.

The defense claimed that if the police is abolished, it still doesn’t solve the inequality in America. Taking away law enforcement, said the team, would only increase mob rule. Abolishing the police would need a lot of explaining. They also believed that reforms work when taken seriously.

The content of the topics have plagued the justice system for centuries. Whether it was through the transition of slavery, civil rights or the modern day with the use of social media; the content is beneficial to the ears of students.  It is also beneficial for the speakers to get practice for their debating skills.

“I hope that students continue this discussion with their friends and think about it,” says senior Taylor Mason, one of the student debaters of the night. “Hopefully, it could start some movement on campus with active students.”