Bring out the cowboy boots and Elvis esque-jackets, because Miley Cyrus’ new album is the epitome of her Tennessee roots. Last month, the 24-year-old released her sixth album titled Younger Now where she described the album as her feeling more youthful now than ever. Cyrus has been on a roller coaster of identities throughout the last decade which has resonated through her music. From the darling of Disney channel, to the rebellious twerkaholic, to now dive-bar diva, Cyrus finally seems to be coming full circle with herself. After a four-year stretch since her last album, this record portrays maturity and a reconnection to the music she was raised on. 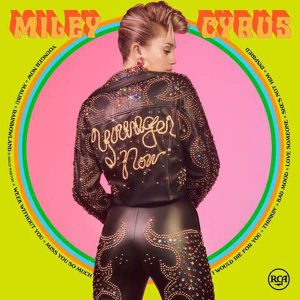 Coming off of her 2013 image when she released her blockbuster album Bangerz, Cyrus has taken the more calm approach. Younger Now represents a Miley of new form. Before, she was teaming up with producer Mike Will Made It to create hits assembled by songwriters but now Miley is getting to express her real self and she’s doing it well. This was seen when she delivered her first single from the album “Malibu,” that describes her joyous rekindling of on and off boyfriend Liam Hemsworth. After a rough patch and breakup during her Bangerz phase, Cyrus and Hemsworth have since found their way back which accounts for her soul searching on this new project. In “I Would Die for You,” the quiet love song reveals the deep, passionate side of Miley while the retro ballad “Week Without You,” shows the singer imagining leaving her lover behind. This is a true representation of the artist embracing her past selves.

There’s no question Younger Now is on a completely different spectrum than her last album. Cyrus celebrates this transformation with her blend of country and radiant pop. Country music is where her origins lie being a Nashville native. She duets with godmother Dolly Parton on “Rainbowland,” a simple yet sweet track about inclusion and idealism backed by lovely harmonies. In “Miss You So Much,” the echoing of steel guitar and ache in her words firmly place Cyrus in down-home serenity. The strong fiddle and feel good lyrics throughout “Inspired,” has a “good old days” meaning to it. The rootsy, classic sound of these tracks has allowed her authenticity to shine.

This album was an awakening for Cyrus as a musician. The twangy pop melodies and storytelling show her blossoming artistry. She sounds softer and more secure with her music compared to her past hell raising, pop persona. The coming-home inspirations and country instrumentations were the mold to Cyrus getting back in touch with herself. The self-titled track “Younger Now,” features some inspiring metaphors like “No one stays the same,” and “What goes up must come down”. These could serve as a reboot in Cyrus’ career and life. Even through the clichés, Cyrus’s new music is proving her to be a more cultivated and refreshed individual.