UWG theatre alumni of 2015 and double-leg amputee, Eric Graise, was recently casted in a dance television show, “Step Up: High Water”, produced by actor Channing Tatum. The disabled actor and singer struggled to make a name for himself in the theatre business but is now a triple threat as he adds dancing using prosthetic legs and a wheelchair to his resume.

Graise is known for his leg-less feature zombie roles on “The Walking Dead” as ‘Stump Leg Walker’ and ‘Fallen Tree Zombie’ for attacking the stars on the show.Lionsgate and YouTube came together and created a spin-off television show of the dance movie: “Step Up”.

Graise is casted as King, one of the main characters of the show as a biracial and disabled boy who is a singer, a dancer, a rapper and a DJ. Graise uses his prosthetics but primarily his wheelchair to perform hip-hop style dancing. The Atlanta based show is going to be released soon and is also starring Ne-Yo, Naya Rivera and Faizon Love. Beginning as an opera major at Shorter University in 2008, Graise transferred to UWG the next year as a business major also interested in marketing. 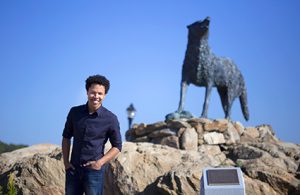 Graise continued to audition for roles in the West Georgia theatre department during his many years here. Even as a business major, he was still casted in plays during his time at UWG. After three years, Graise changed his major from business to art.

“I was convinced I couldn’t make my whole career about theatre even though it was what I loved most to do,” said Graise. “I was convinced a long time ago that I couldn’t do it. As a double-leg amputee I would not be able to dance and play the characters that were so big and vibrant and lively in musicals because I thought I would not be able to move and portray that character correctly, so I went into the arts and became an art major.”

After a year of not being satisfied with his major, Graise did what he had been longing to do all along: he changed his major to theatre. Three years later, he happily graduated from UWG.

“I am really thankful for all of the things I did at West Georgia and all the opportunities West Georgia gave me to do those things,” said Graise. “The theatre department saw that I loved to be active in a lot of things, even with my disability, and they did not stop me from doing that. I appreciated that because once I left the school, I felt ready to do anything I wanted to do.”