Skip to content
The UWG Theatre Company put on a week-long performance of Evil Dead: The Musical just in time for the Halloween season.
Evil Dead: The Musical is based upon the 1981 film The Evil Dead and adapted to feature various songs. UWG’s production ran from Oct. 10 to 14 at roughly 100 minutes with a brief intermission and a few set changes. The show was filled catchy songs that allowed the audience to interpret the scenes in refreshing and unique ways, several lines of humor that provided moments of comedic relief and a diverse range of costumes and effects that included elements of gore, fog and intense strobe lights. 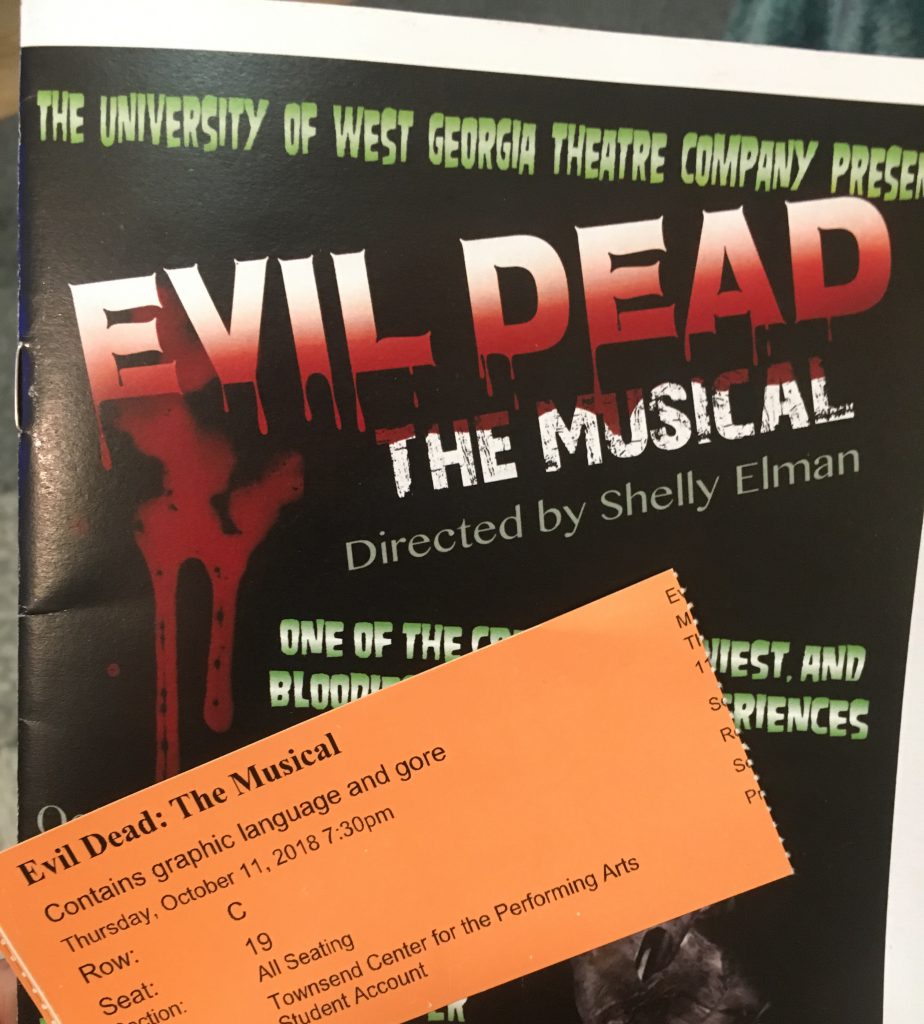 The night began with a excerpt from the Book of the Dead before the audience was introduced to the five main characters of the first half of the show. The cast featured a diverse group of members who accompanied each other well on stage and each had distinct character attributes and appearances that made it easy to keep them all separate during the evening. There were a few hiccups during the show, such as wardrobe malfunctions, but the actors handled them well and did not skip a beat.
A few of the songs throughout the performance were a bit unusual and while some actors were able to captivate the audience with their voices, a few cast members struggled to hit the notes and stay on tune with the songs. The catchiest song of the night, “Do the Necronomicon,” was sang in harmony and the most enjoyable of the performance. It was also accompanied with a dance number that the cast clearly enjoyed as they allowed themselves to let loose and have fun on-stage.
Two prevalent themes of the show–gore and profanity–were present throughout the performance. The gore, while suggestive and gruesome, was clearly exaggerated by the actors and stage crew as the use of fake blood was apparent to the audience. A scene in which a character’s intestines were shown falling out lacked a terrifying effect as the props looked more like sausages stuffed with cotton than bloody guts. Even when the head of a character was chopped off, the scene was extremely toned down by placing the actors behind a big sheet-like screen to reduce a gruesome decapitation into nothing more than a shadow.
However, the evening did not lack in terms of profanity and sexual humor. From the beginning the audience was exposed to several lines of profanity which continued throughout the entire show. The sexual humor and references were also common and happened the most during the first half of the show before one particular character died taking a majority of the references with him.
After a brief intermission, the show opened back up with three new characters to replace the three who died in the first half. These new characters were more entertaining and exciting to watch. There was a new dynamic of actors performing and their chemistry was electrifying. Cierra Byrd and Saani Parham, who played Ed and Annie, were hilarious and fun to watch. They also worked well with Tyshawn Gooden who portrayed the show’s main character, Ash.
The biggest stars of the entire night came rising from the ground at the end of the show. Right before the final set change, the show’s band started appearing as an entire set lifted from below the front of the stage. The audience went crazy as when they saw three masked men playing instruments. The face distorting masks the band wore signified to the audience that they had been consumed by the evil dead as well. This distraction allowed the stage crew to change the set dramatically for the final scenes.
Evil Dead: The Musical was the perfect show to start off the month of October. It contained that element of horror that people crave while keeping things light-hearted with humor. However, there were parts of the musical that lacked that realistic and excitement factor. While the show was interesting, it could have been better if they played up the gruesome and gore on a realistic level.