Georgia Tech men’s basketball has been far from a program of fruition in its history. Since the program’s first season all the way back in 1919 the Yellow Jackets have made the coveted NCAA Tournament just 16 times, with a mere two appearances in the Final Four and no National Championship Titles to their name.

In the 2016-2017 season, the Georgia Tech Yellow Jackets were picked by many to finish dead last in the Atlantic Coast Conference; some even thought they’d be unable to win a single game in conference. They wound up being one of the biggest surprises throughout college basketball, finishing 21-16 and though they did not make the NCAA Tournament, the Yellow Jackets made a run to the championship game of the National Invitation Tournament.

Georgia Tech’s success last season brings optimism to the 2017-2018 season, as some of the most important pieces are back at it for this year. Head coach Josh Pastner, the ACC Coach of the Year last season, leads a talented and experienced group that is striving to make a name for themselves in the national landscape this season. 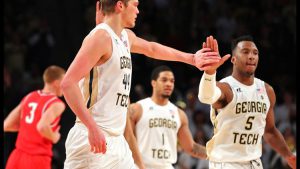 Senior center Ben Lammers comes into his final season at Georgia Tech with numerous accolades already under his belt. Last season he put up outstanding numbers averaging 14.2 points, 9.2 rebounds and 3.4 blocks per game. His defensive proficiency earned him the honor of winning the ACC Defensive Player of the Year award. Lammers was also named to the 2017-2018 Preseason All-ACC First Team, which accumulates the five best players in the conference. He is the best player on this team, and through leadership and experience looks to push Georgia Tech onward.

Sophomore Josh Okogie returns after leading the Yellow Jackets in scoring last season at 16.1 points per game. He looks to have a breakout year this season and ultimately take on the primary scoring role for the Yellow Jackets after scoring in double-figures 32 times a season ago. During the summer Okogie was a part of the USA’s national team roster for the 2017 FIBA U19 Basketball World Cup, helping Team USA win a silver medal in the tournament. He has been recognized by the conference as well, being named to the 2017-2018 Preseason All-ACC Second Team. Both he and Lammers are the centerpieces of this roster, and will be the ones looked at to come through every single game.

While Lammers and Okogie are the stars of the team, Georgia Tech will have some help from other established role players as well. Tadric Jackson heads into his senior year after averaging 12 points per game last year. Rising sophomores Justin Moore and Christian Matthews will look to step up with increased roles as well.

Josh Pastner is helping create a growing program at Georgia Tech, and after the successes of his rookie season as a head coach he looks to help the team continue growing. The Yellow Jackets are being slept on once again in the national landscape of college basketball this year. With stars and experience ready to give it their all, this is a group that will likely shock a lot of people yet again.